In the early morning hours of February 16, a long-defunct Russian surveillance satellite finally gave up the ghost, making the final plummet through the atmosphere, over twenty years after it ceased operations.

Cosmos 1220’s was an uncontrolled reentry, so there was some concern that it might land on top of an inhabited area. Space Safety Magazine contacted Dr. Roger Thompson, a senior engineering specialist at The Aerospace Corporation who analyzes space situational awareness and collision avoidance, to learn more about the reentry, the hazards it posed, and what might be aiming for us next.

According to predictions, Cosmos 1220 should have hit the ground on February 16. Do we have any idea where it landed (or splashed)? 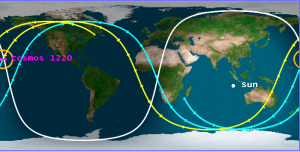 The final reentry track estimate for Cosmos 1220 on February 16 (Credits: The Aerospace Corporation).

The short answer is no, we don’t know where any surviving fragments may have landed. Predicting a reentry time is very difficult and our uncertainty in predicting when an object will reenter is generally about 20% of the time to go. For example, if the reentry is predicted to occur in 6 hours, it could reenter up to 72 minutes earlier, 72 minutes later, or any time in between. At a speed of over 7 km/s, plus or minus 20% can result in a very long locus of potential reentry points. You can see the last estimate we provided for Cosmos 1220 on our website here: Cosmos 1220 reentry track. The reentry and impact point of any surviving fragments will be somewhere on the blue or yellow lines. However, since about 70% of our planet’s surface is covered by water, debris that survives a reentry has a higher chance of landing in water than on land.  A good part of Cosmos 1220’s last few orbits was over the oceans, so an impact along one of those ocean tracks would be most likely. 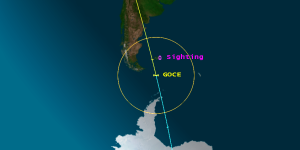 There is an unconfirmed report of the satellite reentering over Saudi Arabia. We will be examining the validity of these reports in the next week or two by comparing the time and location against our reentry predictions. If the sighting checks out, we will post that information to our website as in this example: GOCE reentry sighting.

Cosmos 1220 was a 1980 reconnaissance satellite, from a time when space debris was less of a concern in orbit. Were precautions for controlled reentry any different then than they are today?

Yes.  These days, guidelines and requirements state if there is a 1 in 10,000 chance of a reentering object injuring one or more people somewhere on Earth, that object should be purposefully deorbited safely into an ocean area, such as the South Pacific. This practice is becoming more common, but as Cosmos 1220 shows, there are a number of old, large objects that cannot be deorbited regardless of the risk.

The number of reentries varies from year to year, but it is not necessarily increasing year to year as this graphic shows: 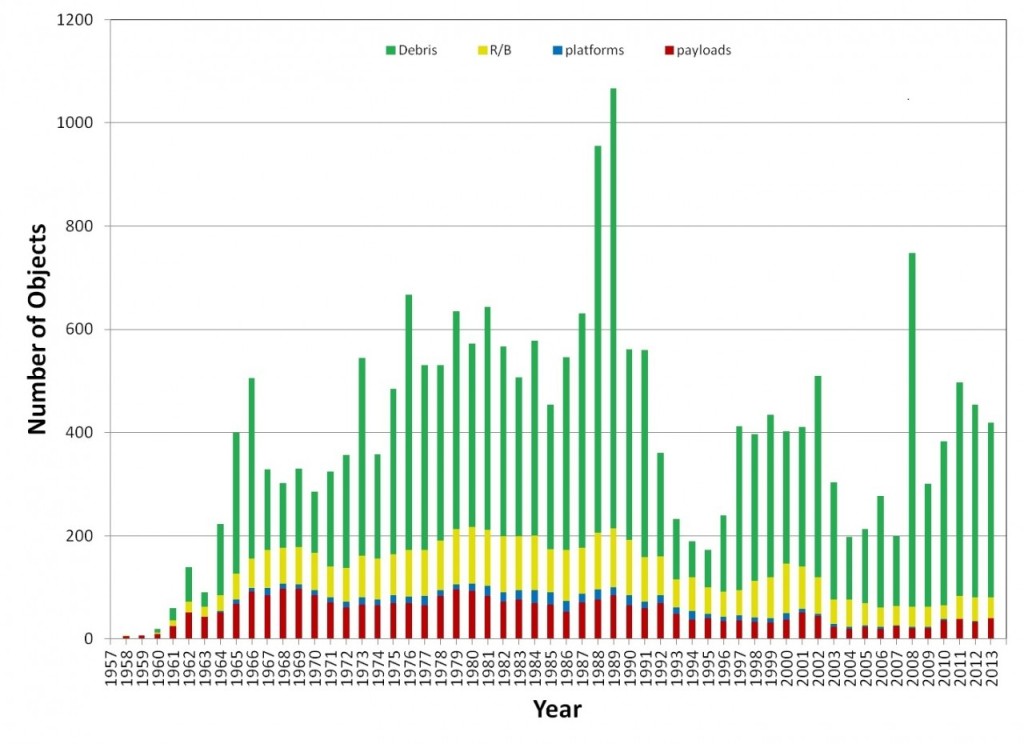 There are generally anywhere from 40 to 100 uncontrolled reentries of objects larger than 1000 pounds (454 kg) every year and the number of reentries of large objects has remained at that level for decades.

Is there anything a member of the public should know or do when an uncontrolled reentry like Cosmos 1220 is expected?

They should know that the probability of being struck by debris from a reentry is very small. In fact, only one person has been brushed on the shoulder (not injured) by reentry debris since the beginning of the space age.  Personally, if a reentry was predicted over where I live, I would go outside to look for it.

What’s the next reentry that will be keeping you up at night?

It will be the next large, uncontrolled object, perhaps a failed booster with propellant still on board, that has a predicted track along a major population corridor such as the US east coast or central Europe. In January 2012, we monitored the reentry of Phobos-Grunt very closely for most of its final week because it was just such a large object with a lot of propellant. Fortunately, it landed in the Pacific, but if it had reentered several minutes later, it would have been over South America.

Eventually, we’ll need to dispose of the International Space Station—a very large object and lots of debris will survive reentry.  As the reentry of the Russian Mir Space Station a few years ago demonstrates (Mir was deorbited into the South Pacific), even these large objects can be brought down safely with enough planning.