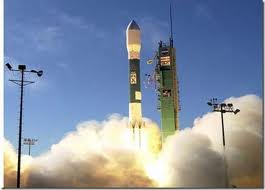 The USA-193 was a US spy satellite launched from Vandenberg Air Force Base on December 14th, 2006 atop a Delta II rocket. Its launch was the first operated by the United Launch Alliance (ULA). Owned by the National Reconnaissance Office, its precise function was classified; however, it is categorized as “Surveillance and Other Military” in the National Space Science Data Center.  Within hours of its launch, contact between the satellite and ground controllers was lost.

For 14 months, the satellite’s orbit continued to degrade, raising concerns that its eventual uncontrolled reentry posed a danger if it landed on the ground in a populated area. Of particular concern was the 450kg of highly toxic hydrazine fuel carried by the satellite, which James Cartwright, vice chairmen of the Joint Chiefs of Staff at the Pentagon, claimed could “could spread a toxic cloud roughly the size of two football fields.” Following an investigation, NASA administrator Michael Griffin stated on February 14th 2008 that when the satellite reentered the atmosphere, the spherical hydrazine fuel tank would reach the ground partially intact, containing frozen hydrazine “slush” that would then evaporate and release toxic fumes. 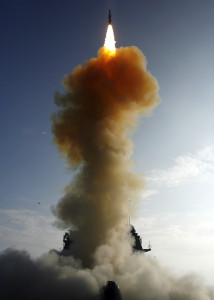 Launch of the SM-3 Missile that Intercepted USA-193 (Credits: US Navy).

On February 21st, a modified SM-3 missile was launched from the USS Lake Erie and successfully intercepted the USA-193 247 kilometers above the Pacific Ocean. The majority of the resultant debris reentered and burned up within 48 hours following the interception.

Following the interception, the magnitude of the danger danger posed by the falling hydrazine tank was hotly debated. Some speculated that real purpose of the interception was to prove US anti-satellite (ASAT) capabilities, in response to a Chinese ASAT test that had occurred only a year earlier. John Pike, a space technology specialist in Washington, told reporters that “the claim that there was a danger from the fuel is not the most preposterous thing the Pentagon has ever said – but it seemed to be a bit of a stretch.”  A subsequent NASA study contradicted the original investigation and predicted that the tank would have breached above 33km, dispersing the hydrazine into the upper atmosphere.

With concerns growing that the Russian Phobos-Grunt probe may reenter Earth’s atmosphere with a fully loaded Hydrazine tank, the precedent of the USA-193 may become of interest once more.

The video belows a simulation of the debris resulting from the interception of the USA-193.