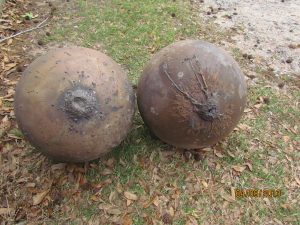 The first and third spheres found on the property of Dean Gentz and Trac Ellis, respectively (Credits: Dean Gentz).

Ever since Dean Gentz found a 35 cm titanium sphere in his backyard, he’s been on a quest to find out what it is and where it came from. Gentz noted the hand-machining and the safety wire holes around the plug. He photographed the sphere and took it to work to perform a Positive Materials Identification analysis. Then, he really started to investigate.

Since we first reported Gentz’s find, this Texas electrician has scoped out two more spheres, discovered by neighbors within 8 km of the first one. The second sphere was found 1.9 km away, at the house of Gentz’s step-son’s friend. Discovered on March 10, that sphere sported a gaping hole in one side. “The plug end looked exactly like the one I have,” said Gentz. “And it was laying right beside a 9″ [23 cm] deep hole in the dirt.”

The third sphere popped up in the next pasture over from Gentz. Initially skeptical, since media stories about his space ball had already made the rounds, Gentz had to admit when he saw it that the third sphere looked an awful lot like his own. This sphere was spotted by neighbor Trac Ellis for “a few weeks” before he picked it up on March 29. It lay beside a 25 cm deep crater. “It was found 475 meters north of where I found mine,” Gentz notes. “If you plot all three spheres, it forms a straight line.” 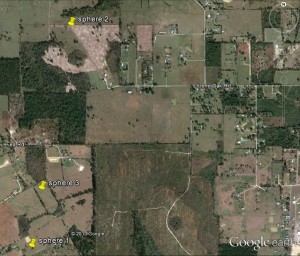 Plot of the locations of the three spheres Gentz has recovered (Credits: Dean Getz/Google Earth).

In further consultation with space enthusiast and former NASA contractor Paul Maley, Gentz took a look at Google Earth to see if he could spot the spheres in the satellite images. He found that Google’s images had been updated since he last looked: his own truck tracks from driving out to pick up the first sphere were clearly visible. So was the third sphere. That image is dated February 28.

All three spheres seemed to be of the same construction: 109.9 cm in circumference, 19 mm plug wrench size, with a plug/bung opening approximately 1 1/8” or ¾” National Pipe Thread (NPT) . Gentz’s sphere weighs 7.26 kg (16 lbs).  The markings on Gentz’s sphere – hand stamped on the flat, E or F on one side, 413 on the other – were not visible on the others. At least Gentz’s sphere was pockmarked, consistent with the dings one typically sees from micrometeoroids in orbit. It also appears that spheres 1 and 2 kept the same orientation on reentry but sphere 3 flipped over at some point. “This is obvious due to the heat damage and ablation on both sides of sphere 3,” says Gentz.

When he plotted them out on a map, Gentz acknowledges that it does look like they were all “arranged in a line from south to north following the flight path of the CZ-4B rocket body.” 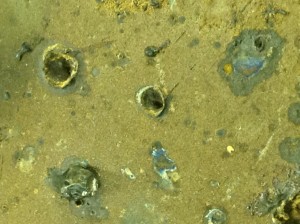 Close up of the surface of Gentz’s first find, consistent with the impact marks from micrometeoroids (credits: Dean Gentz).

In the meantime, Gentz has not only been traipsing across pastures investigating space balls; he’s also been reaching out to experts for answers. NASA’s Orbital Debris office did not seem to have any, although they confirmed to Space Safety Magazine that the office had looked in matter, but had no wish to be quoted on the subject. ATK was able to confirm that the tanks were not of their making. Several individuals suggested that the tanks looked remarkably similar to debris from several different configurations of Soyuz – but there had been no Soyuz in the vicinity at the time, excepting the SL-4 Rocket body that was observed reentering over Europe on February 13. The only viable reentry event contradicted Gentz’s own observations – although he had to admit the evidence in favor of the CZ-4B explanation was piling up. But what was he to do now? What does one do with three – or potentially eight, as Gentz is now hearing of five more potential candidates in the area – hollow titanium spheres?

To find out, Gentz contacted an individual who has trodden the same path. Robert Dunn was out hiking in Colorado in March 2011 when he heard a high pitched sound and found a 76 cm diameter sphere, still warm to the touch. It sat next to a 30 cm crater and had Russian writing on it. The sphere was quickly confirmed to be a titanium tank from a Russian upper stage rocket. Dunn found another similar sphere nearby. He now lives in Wyoming, but Dunn still has the spheres with him; in fact, he doesn’t know how to legally get rid of them. According to the 1967 Outer Space Treaty, international law identifies a reentered spacecraft or portion of a spacecraft as belonging to the state responsible for its original launch. In Dunn’s case, that state is Russia. Gentz has spoken with Dunn and found Dunn had tried to auction off his tanks, but the auction houses are not able to sell an item that belongs to the Russian government. “He is trying to get the Russians to release ownership but I don’t think that’s going to happen,” says Gentz. Nor have the Russians exhibited any interest in recovering their property.

Where does this all leave Dean Gentz? He and his neighbors are now holding likely but unconfirmed space debris, possibly but not certainly belonging to China. Will China attempt to repossess its property? That has yet to be seen. In the meantime, one hopes Gentz’s hometown has plenty of garage space to keep their steadily growing store of spherical titanium tanks.

Check back for more updates on Dean Gentz’s search for answers and space debris. We will continue to update this story as new information comes to light.