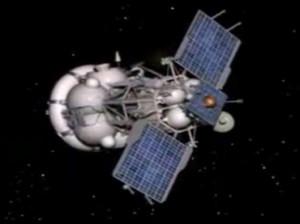 A rendition of the Phobos-Grunt probe. (Credits: Roscosmos).

According to a January 14 press release from Roscosmos, the agency now expects Phobos-Grunt to reenter Earth’s atmosphere on Sunday, January 15, most likely in the Pacific Ocean off the coast of Chile.  The reentry is likely to take place around 9:51 PM Moscow time, as reported by RussianSpaceWeb.com.

Although the anticipated reentry date has remained fairly constant, the expected location of reentry has varied considerably over a week of predictions. Experts now believe that with the probe’s perigee at a latitude of 46S, reentry is highly likely to occur in the vicinity of South America.

Unofficial sources are noting that Phobos-Grunt’s orbital parameters indicate that the reentry time may slip, possibly to January 17, due to reduced atmospheric drag on the probe from low solar activity levels. USSTRATCOM does not appear to be issuing further updates on the probe’s reentry. Space.com has reported that ESA’s current prediction calls for a January 15 reentry in the early evening, Central European Time. Heiner Kinkrad, head of ESOC’s space debris office, identified an uncertainty of +/- five orbits, equivalent to 7.5 hours, which could carry the reentry time to Monday, January 16.