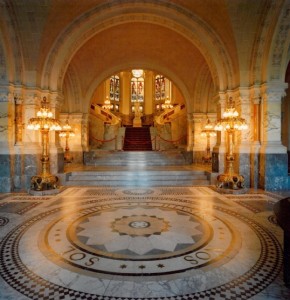 The Peace Palace at The Hague, home to PCA. (Credits: PCA).

On December 6, the Administrative Council of the Permanent Court of Arbitration (PCA) adopted Optional Rules for Arbitration of Disputes Relating to Outer Space Activities. This procedure represents the first time a formal mechanism has been established to resolve space-related international disputes.

The procedure, written by PCA’s International Bureau in conjunction with an advisory group of air and space legal experts, was designed to “reflect the particular characteristics of disputes having an outer space component involving the use of outer space by States, international organizations and private entities.”

Development of the procedure began in 2009 to meet a percieved need in the rapidly developing arena of space activities. Indeed, as early as 1998, the International Law Association (ILA)’s Space Law Committee began recommending the creation of additional legal tools in their Draft Convention on the Settlement of Disputes related to Space Activities. The ILA’s Space Law Committee, a permanent observer to the UN Committee on the Peaceful Uses of Outer Space (COPUOS), collaborates with space law centers around the world on the “study, clarification and development of international law” with respect to space activities. In 2000, the committee reported the concern that “ever increasing private activities in outer space are diminishing the risk of state immunity clauses being brought up during dispute settlement procedures.”

The PCA was created in 1899 by international treaty to provide dispute resolution services. It is in an intergovernmental organization comprising over 100 member states and is located at The Hague.