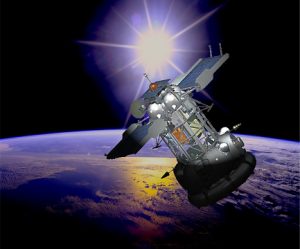 With the December 10 declaration by a senior Russian space official that officially pronounced the Phobos-Grunt lost, attention is being shifted to the probe’s inevitable atmospheric reentry. Below is a  timeline of events from the launch of the probe to the December 10 announcement:

November 9, 2011– The Phobos-Grunt is successfully launched atop a two-stage Zenit rocket from Site 45 at the Baikonur Cosmodrome at 2016 GMT. The rocket performs exactly as planned, placing the probe into a parking orbit with an inclination of 51.4 degrees. Within an hour of the launch, a ground station in Moscow receives telemetry from the probe, indicating that it is functioning properly, the solar panels have deployed, and the attitude control system has oriented the spacecraft to face the sun and recharge its onboard batteries.

November 10, 2011– Although Roscosmos is strangely silent about the status about the probe, speculation begins to circulate that there had been a malfunction. Ted Molczan, a prominent satellite observer reports that the orbital position of the probe indicates that it did not perform planned maneuvers that would take it into a higher transfer orbit, prior to it launching towards Mars. The NORAD deep space antenna in California receives a signal from the probe broadcasted northward on all frequencies, indicating serious onboard technical issues. Roscosmos unsuccessfully attempts to activate the onboard radio transmitter used to track the probe’s orbit.

November 11, 2011– Attempts to recover the Phobos-Grunt from its parking orbit are unsuccessful, and concerns are first raised about the possibility of a health risk posed by the 10 tons of toxic hydrazine fuel carried aboard the probe. Despite the lack of contact with the probe, its altitude inexplicably increases instead of decaying, possibly indicating propulsive activity.

November 13, 2011– Further attempts to contact the probe are unsuccessful, and its altitude stops increasing and begins to decay. As predictions as to the eventual reentry date begin to circulate, Roscosmos remains publicly silent on the status of the probe, with most information coming from unnamed industry officials. 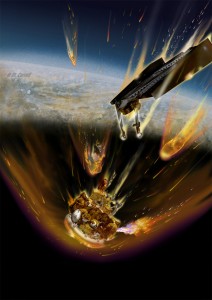 An artists impression of the Phobos Grunt reentering the atmosphere (Credits: Michael Carroll)

November 14 to 20, 2011– No successful contact is made with Phobos-Grunt, which continues its descent. Valdimir Popovkin, the head of Roscosmos, states at the traditional post-flight press conference that the exact cause of the failure was as yet unknown, but obstruction of the primary antenna by the main propulsion unit was suggested as a possibility.

November 21, 2011– The primary mission objectives of the Phobos-Grunt mission are officially abandoned, as the planetary transfer window to the Martian moon closes without successful contact with the probe. The European Space Agency (ESA) officially joins efforts to rescue the probe, commiting ground stations in Kourou (French Giana), Perth (Australia) and Maspolamas (Canary Islands).

November 23, 2011– The ESA ground station in Perth receives the first signal from Phobos-Grunt since contact was lost after its launch. Due to technical limitations of the Perth antenna, only a carrier signal is detected, and the satellite is only within range for 6 to 10 minutes; nevertheless, the station manages to send a command to the probe to activate its onboard transmitter. The antenna (which had already been partially upgraded to enable communications with the probe) is further augmented to allow for telemetry downloading in time for the next pass.

November 24, 2011– Due largely to the antenna upgrades, the Perth station manages to downlink telemetry from the Phobos-Grunt, which is sent to NPO Lavochkin for analysis. The first set of telemetry confirms normal functioning of the communication and power systems. Two more sets of telemetry are downlinked, containing invaluable information on the main onboard computer; however, the data is unreadable due to an incompatible decoding system used by the ESA ground station. Attempts to communicate with the probe on subsequent passes, when the probe’s second low-gain antenna is pointed at the Earth, are unsuccessful.

November 26 to 29, 2011– Despite the previous successes, contact with the Phobos-Grunt is highly unreliable, preventing Roscosmos from determining the exact cause of the failure. Commands sent to the probe to raise its orbit are not received. Russian president Dmitry Medvedev threatens punishments including fines and jail time for those responsible for the failures.

December 2, 2011– Following days without success, ESA announces it will discontinue support of the Phobos mission to focus on other missions. It offers to continue assisting the probe if contact is reestablished.

December 5 to 9, 2011– In response to a request from Roscosmos, the ESA ground station in Maspolamas attempts to contact the Phobos, again without success.

December 10, 2011– Roscosmos officially abandons efforts to recover the Phobos-Grunt probe, and creates a task force to study the probe’s reentry. Based on the rate of orbital decay, the probe is predicted to reenter the atmosphere around January 9, 2012.