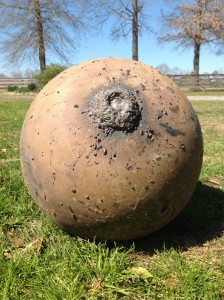 It was late February 2013 when Dean Gentz, an American electrician, spotted a strange object in his cow pasture near the tiny town of Buna, east Texas. First, he didn’t pay any special attention to it thinking it was most probably just another toy his nephews and nieces had left around. When he finally decided to pick it up, he was astonished – the brown metallic sphere might from afar have resembled a ball, but most definitely was not. The 35 cm diameter object didn’t look like anything Mr. Gentz had ever seen before.

“What I noticed when I first saw the object got my attention,” says Gentz. “The way one side of the sphere was melted – I didn’t think someone could have done that with a torch, plasma arc, arc gouge, or any other means I knew about. Also, when you heat metal, it will cool and have a different look. As in this case, the melted metal spalling was blown back over the sphere, I knew that it had been done in an ‘event,’ not by humans.” Though not having any formal education in engineering, Mr. Gentz admits that working at the technical department of a large chemical plant equipped him with an inquisitive mind and decent knowledge of metallurgy and materials. “I am not sure how many people would have noticed these things. Several people said they would have thrown it away.” 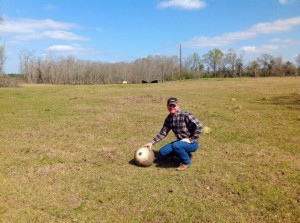 But Dean Gentz was intrigued. He admits the thought of space debris crossed his mind rather early, but at first he dismissed it. What are the odds that you will find a piece of space junk in your garden? Far less than winning a lottery! On the other hand, this was east Texas, exactly the same area that, in February 2003, was showered with hundreds of pieces of debris after the tragic reentry of the Space Shuttle Columbia. During the extensive search organized by NASA after the disaster, locals got kind of accustomed to seeing reentry damaged fragments around the place. But this looked somehow different.

Dean’s curiosity was stirred – the ball seemed rather light for its size and the plug on the opposite side of the sphere was obviously hand machined and really small. “Then I saw what I thought was a sure sign it was from the aerospace industry. The plug and the ‘bung’ where the plug was screwed in, were both drilled twice for safety wire. That was the biggest thing – the safety wire holes!” he recalls. 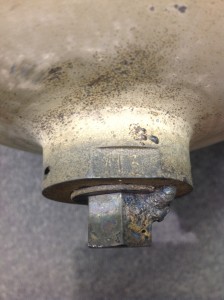 A close look showed Gentz that the plug had been hand machined and sported two holes for safety wires (Credits: Dean Gentz).

He threw the mysterious ball into the back of his truck and returned home. For the rest of the day he couldn’t stop thinking about it and later that evening decided to call his friend who, as Dean says, “has more of a background in airplanes than I do.”

Together they made a decision – the fastest way to learn more about the object would be to analyze its chemical composition. Luckily, the labs of Dean‘s employer are equipped with some rather high tech machines, so the next day, he took the object with him to work and ran a couple of tests on it using the Positive Material Identification Unit. “It takes a few seconds for the machine to display the reading. When it popped up, the guy running it said ‘what the hell is Ti?’ The machine read: Ti 91.25%, V  4.70%, Si  2.05%, Fe  0.098%, Zn. 0.015%, Mo  0.013%,” Dean recalls.

Still reluctant to accept that he might have been “so lucky” as to find space debris in his own backyard, he decided to do more research. Eventually he stumbled over the website of space enthusiast Paul Maley and together they reached out to NASA and the Aerospace Corporation. The question of when exactly Dean saw the object the first time soon popped up. And even though he was dead sure it was on February 28 when he picked it up, he couldn’t recall how long the sphere had been lying there before.

“I told Paul it was probably around February 20 when I first noticed it. I thought it was out there for a week before I picked it up. But I really don’t know. I tried to ask my wife and the neighbors. Everyone says ‘I don’t know maybe a week maybe a day.’ And the damn cows aren’t talking.” 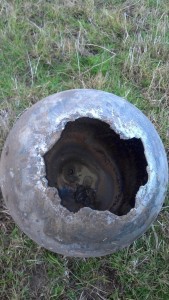 A few days after Gentz found a mysterious titanium tank in his pasture, a neighbor turned up this one (Credits: Dean Gentz).

This is the point where the first cracks in the story appear. Dean was genuinely excited when an email from an Aerospace Corporation engineer arrived claiming that on February 27 a reentering Chinese rocket CZ-4B flew exactly above Buna and that it was highly likely if the object actually was space debris, that it would have been related to this body. Good news you might say, but Dean decided to be honest with himself  – he believed it had been lying in his field longer than just one day. Was his memory fooling him?

Soon after, a similar sphere was discovered in a nearby pasture and eventually the whole mystery was leaked to local media – something Dean himself is not really enthusiastic about. Rather than creating a UFO-like sensation, he would prefer to learn the truth about the titanium sphere that appeared out of nowhere. In fact, it definitely must have come from somewhere. So far, NASA has exhibited no interest in Gentz’s find and many questions remain to be answered.

If you have any idea what the object might be, let us know. We will keep you posted on the developments and hopefully will be eventually able to find the truth. Even though the probability is low, it might be good knowing what to do if you ever happen to find a “space ball” in your own backyard.

– By Tereza Pultarova and Dean Gentz