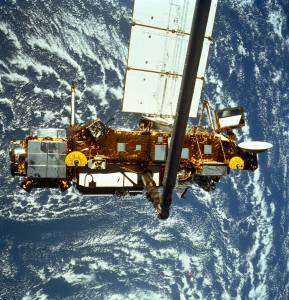 According to NASA experts, the UARS satellite is expected to reenter Earth’s atmosphere around September 23, earlier than previously anticipated.  “Re-entry is expected Sept. 23, plus or minus a day,” said NASA, “The re-entry of UARS is advancing because of a sharp increase in solar activity since the beginning of this week.” The Upper Atmospheric Research Satellite (UARS) is a massive satellite launched in 1991 which ceased operations in 2005. The majority of the spacecraft is expected to burn up upon reentry, but there are about 26 large pieces which are likely to make it to the ground. According to NASA, no toxic fuel is left in the spacecraft’s tanks. Satellite fragments will be scattered over an are about 804 kilometers long. NASA expert said that the chance that a debris may hit a person is about 1 in 3200, since 75% of of Earth’s surface is covered in water and population is quite sparse in the remaining land. Victoria Samson, the Washington Office Director of the Secure World Foundation, an organization dedicated to the peaceful use of outer space, commented: “There’s a really good chance it’s going to go straight into the ocean.”

NASA and the Joint Space Operations Center of U.S. Strategic Command at Vandenberg Air Force Base, Calif., are following the satellite trajectory, but they will be able to identify the reentry zone just a few hours before actual reentry. NASA recommended the public not to touch any debris that may reach the surface, and to contact local law enforcement agency. You can track UARS in real time at  n2yo.com.