The space station is of cylindrical shape with a length of 10.4 m and an overall diameter of up to 3.4 m. There are two solar panels attached with a total cross-section of approximately 35 m². The station consists of two sections: a service module (for power generation, attitude/orbit control, telecommunications, etc.), and a pressurized habitat equipped with the docking system. The total mass of the space station is in the order of 8.5 metric tons.

The original plans were to deorbit Tiangong-1 in 2013, leading to a controlled re-entry over uninhabited areas of the Earth in order to avoid an undue risk to people on the ground caused by surviving fragments. Instead, the orbit of Tiangong-1 was regularly raised during the last three years. The last re-orbit maneuver was executed in December 2015.

On March 23, 2016, the Manned Space Engineering Office of China announced that Tiangong-1 had ceased operations. This will potentially lead to an uncontrolled re-entry in the second half of 2017, if no controlled re-entry maneuver is performed until about mid of 2017.

The size, mass, and materials of Tiangong-1 make a complete demise during re-entry impossible. Up to 40% of dry mass is expected to survive (>3 metric tons). The casualty risk is currently estimated to be in the order of 1:1,000, which is ten times higher than the risk limit considered as acceptable on international level. 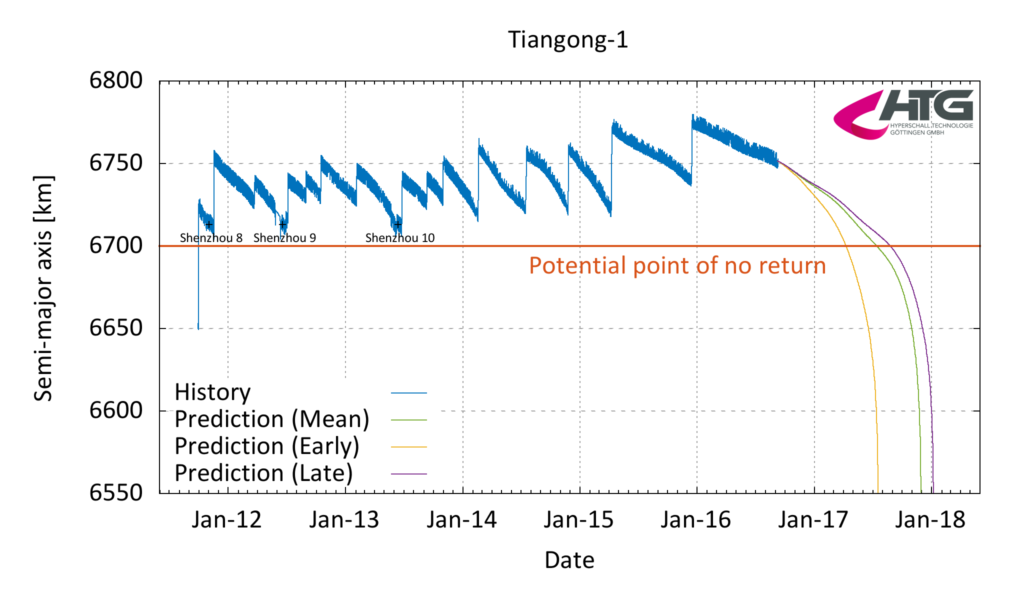