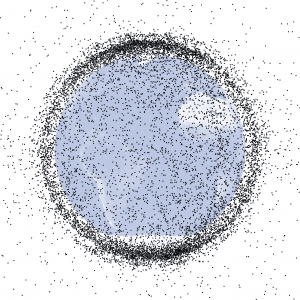 Left tumbling for two months after a launch failure, a Proton Breeze-M finally exploded on October the 16th 2012, creating a new debris cloud in a 264 km x 1512 km at 49°.9 inclination elliptical orbit. On August the 6th 2012, the shut-down of the Proton Breeze-M stage shortly after the start of the third of its four planned maneuvers resulted in the loss of the two spacecraft it was carrying, Telkom 3 and Express MD2.

The first orbital elements for the breakup were released late on October the 24th, showing that the US Space Surveillance Network (SSN) was tracking at least 80 new pieces of debris, a few more than the twelve claimed by Russia. Most of them are bunched closely together. A small number are scattered around the orbit.

Initial analysis allowed experts to determine the time of breakup and to investigate possible causes and implications of the event. The result of that analysis was that the breakup happened around 16:31 UTC on the 16th of October 2012. The explosion occured right at perigee for the Breeze-M rocket body, which was still carrying a tank full of fuel. Regarding perigee altitude of the tumbling stage, it is likely that the cause of the breakup was due to atmospheric heating.

The US Joint Functional Component for Space (JFCC Space, a component of US Strategic Command) is currently working to characterize the break up of the rocket body more accurately and to assess the impact of the debris field to objects on orbit. Debris are crossing the International Space Station orbit at almost right angles in its 50.2° inclination orbit. The intersection of the two orbits occurs where debris are at about the same altitude as the ISS (between 405 and 425 km altitude), thus creating a serious potential threat.