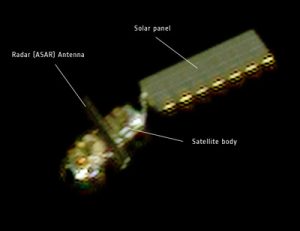 On 15 April, the French space agency CNES rotated the Pleiades Earth observation satellite to capture this image of Envisat. At a distance of about 100 km, Envisat’s main body, solar panel and radar antenna were visible.

A drifting satellite as big as Envisat would be more than just a huge space wreck: in case of collision, given its mass, volume and shape, it might generate a cloud of smaller debris large enough to populate the orbit, initiating a self-sustaining chain-reaction of collisions and fragmentation with production of new debris. This phenomenon, known as the Kessler Syndrome, would eventually make space operations difficult or even impossible, and prevent access to space to future human generations.

We asked Don Kessler for a comment over the Envisat issue: “It seems ironic that a satellite intended to monitor the Earth’s environment is at risk from the space environment and is likely to become a major contributor to the debris environment” he said. “Envisat is probably one of the best examples of a satellite that should have followed either NASA’s 1995, or ESA’s 2002 debris mitigation guidelines: Envisat is a very large target, operating at an altitude where the debris environment is the greatest and likely to increase. In the next 150 years that the satellite will remain in orbit, it will become a significant debris source and could easily become a major debris contributor from a collision with debris as small as 10 kg.” 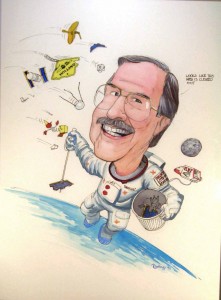 About the collision avoidance with the Chinese upper stage, Don said: “The need for a collision avoidance maneuver from the 1500 kg Chinese rocket is not a surprise. Envisat is currently operating in an environment where 2 catalogued objects can be expected to pass within about 200 meters of Envisat every year, which would likely trigger the need for a maneuver to avoid a possible collision. I fully agree that if Envisat had collided with the Chinese rocket, ‘it likely would have polluted a highly used portion of low Earth orbit with 10 times as much junk as what was caused by the 2009 collision of an operational Iridium communications satellite with a retired Russian Cosmos spacecraft‘, as stated in your email.”

Asked about whether the event might have triggered a collisional cascade, he commented: “Although I would not use [that exact statement], I would not object to anyone else using the term in this case. The cascade process can be more accurately thought of as continuous and as already started, where each collision or explosion in orbit slowly results in an increase in the frequency of future collisions. But since Envisat is so massive, if the collision had occurred it would instantly produced a debris environment that, under the most optimistic conditions, we would not expect to have for at least 100 years. That is close to what most might call a “trigger” event.”

Don Kessler is an American astrophysicist and former NASA scientist who worked at the Johnson Space Center in Houston, Texas, where he started what is now called the NASA Orbital Debris Program Office . Still active in the space community as Orbital Debris and Meteoroid Consultant, Don is an honorary member of IAASS.