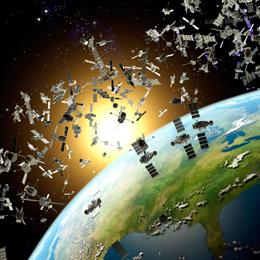 Space debris in low Earth orbit (LEO) could be reaching a tipping point according to a UN report (Credits: Roger Harris/Science Photo Library).

A report from the Inter-Agency Space Debris Coordination Committee (IADC), which is meeting during the 50th Session of the Scientific and Technical Sub-Committee to the Committee on the Peaceful Uses of Outer Space (COPUOS), states that the debris situation in low Earth orbit (LEO) may be reaching a catastrophic tipping point.  This tipping point, known as the Kessler Effect, was first predicted by Donald Kessler from NASA in 1978.  The Kessler Effect envisions a scenario where the density of objects in LEO is high enough that collisions between objects will cause a cascade of collisions with each collision generating space debris thereby increasing the likelihood of further collisions.  One inference of this cascade event is that the distribution of debris in orbit could render space activities in LEO, including the use of satellites such as the recently launched Landsat 8, impossible for several generations.

The study presented by the IADC used six space debris models from six IADC members: ASI, ESA, ISRO, JAXA, NASA, and UKSA.  Each of the models used a 2009 baseline environment for space debris larger than 10 centimeters, which was provided by ESA’s MASTER model.  From this baseline, all six models used a future space traffic assumption based on space traffic from 2001 to 2009.  From this point, each model used its own solar flux projection standard with a future post-mission disposal (PMD) compliance level assumption of 90% for both spacecraft and launch vehicle stages.  All the models defined a “catastrophic collision” as one with an impact kinetic energy to target mass ratio of 40 joules per gram or greater.

The results of all six models programmed with these assumptions showed similar qualitative results in the increase in the amount of space debris larger than 10 centimeter in LEO over the next 200 years.  The models varied in the number of catastrophic collisions from one every five  years to one every nine years, but they did agree that the majority of catastrophic collisions will occur in LEO altitudes above 800 kilometers with the majority of debris accumulating between 800 kilometers and 1000 kilometers over the next 100 years due to the proliferation of space objects at those altitudes.   Space debris below 800 kilometers is less likely to accumulate because of atmospheric drag, which was recently evidenced with the reentry of the Earth resource satellite Cosmos 1484 after nearly thirty years in orbit.