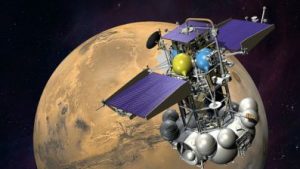 Only intermittent contact has been possible with the ailing Phobos-Grunt probe, despite promising news on November 23rd that a carrier signal had been received from the probe by an ESA tracking station in Perth, Australia. Although the Perth station was subsequently upgraded with an expanded antenna range to enable it to receive telemetry from the probe, controllers in both Perth and Baikonur were only able to obtain sporadic pieces of telemetry from the probe. Consequently, the exact problem with the probe remains unclear.

Efforts to recover the probe have been hampered by the lack of success receiving a complete set of telemetry. Although some data has been received from both stations, much of the telemetry downloaded inPerthwas scrambled, possibly due to it passing through a potentially incompatible decoding system. Current speculation as to the cause of the failure centers around a failure of the onboard power system, which would prevent the probe from communicating while its solar panels are not illuminated by the sun. “The only realistic goal for ground controllers at the time was to receive useful information on the cause of its failure,” wrote Anatoly Zak on russianspaceweb.com, “If the culprit could be found and if critical systems onboard the spacecraft could be reactivated, attempts to establish some or even full control over the spacecraft would be made.”

If telemetry could be reliably retrieved from Phobos Grunt, it would allow ground controllers to ascertain the cause of the failure and evaluate options for removing the probe. An attempt to raise the altitude of the probe into a more stable, highly elliptical orbit was made on November 28th, in an effort to prolong the life of the spacecraft. Although the first attempt was unsuccessful, ground controllers plan to attempt the manoeuvre again, to buy precious time for the issue to be resolved before the probe reenters the atmosphere.

The Phobos Grunt probe has been trapped in the low earth orbit since it failed to perform a scheduled orbital manoeuvre shortly after its launch and lost all communication with the ground. The probe was designed to travel to the Martian moon Phobos, to return a soil sample to Earth. However, following the loss of communication, concerns were raised about the potential health risk posed by the probe, should its nearly 10 tons of toxic fuel and heat-hardened sample retrieval capsule reenter the atmosphere.

The video below is an video observation of the Phobos Grunt probe from the BREIT IDEAS Observatory in Martinez, CA.
[youtube http://www.youtube.com/watch?v=yf1pXjxcHOI&w=420&h=315]