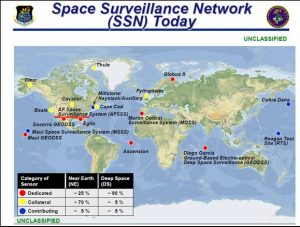 SSN is a network of sensors located in 29 sites around the world designed to monitor objects in space (Credits U.S. SSN).

Japan and the United States have reached an agreement about the monitoring of space debris in Earth orbit, on May 28.

“Sharing information with the United States is beneficial to safe operations of Japan’s satellites and other spacecraft,” said Japan Foreign Minister, Fumio Kishida before signing the agreement with John Roos, the U.S. ambassador in Japan.

According to the agreement, the U.S. will provide Japan with information and analysis about optimal launch trajectories to avoid collisions in orbit between active satellites and dead spacecraft or rocket bodies.

“It is meaningful in that it represents a concrete case of progress in Japan-U.S. space cooperation in the security area,” said Kishida. “This arrangement is expected to contribute to safe operations of Japan’s satellites by enabling the United States to share information on space debris with Japan in a more extensive and expeditious manner.”

Even before this new agreement, America has been keeping Japan up-to-date about the space debris situation and possibility of in-orbit collisions, through the Space Surveillance Network (SSN). The U.S. has globally deployed 29 optical and radar sensor sites to monitor space debris. The system is completed by Space Based Space Surveillance 1, the first satellite of an already planned constellation to improve detection and tracking of satellites especially in geostationary orbit. SSN is currently tracking 8,000 artificial objects in space and a total of 21,000 objects larger than 10 cm. NASA has estimated the population of particles between 1 and 10 cm in diameter is approximately 500,000 and the number of particles smaller than 1 cm exceeds 100 million.

The collaboration between Japan and the U.S. will not be just one-way. Japan has the capability, through its ballistic missile defense system, to detect space debris. However, there is no framework in place to contribute to a joint tracking capacity. The setting up of this framework will allow America to fill the blanks in the Western Pacific, where the SSN is not very well established. Kishida also confirmed that the agreement is just a first step of a more effective bilateral space cooperation.