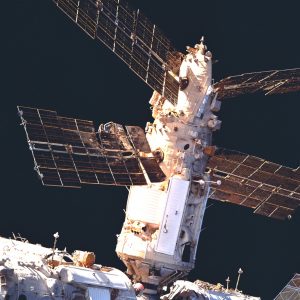 On June 25, 1997, the Progress M-34 spacecraft crashed into Spektr while maneuvering for a docking with the Kvant-1 module. The collision damaged one of Spektr’s solar arrays, caused a fracture that depressurized the module. The module was sealed off and isolated from the rest of the station to prevent loss of pressure of the entire station. The operation required cutting off the power cables coming from Sepctr’s solar panels. Power restoration required two internal spacewalk in August and October 1997, which restored about 70% of the power capability previously available. The module was left isolated from the Mir complex until the end of the space station’s life.