By far the worst launch pad failure, the Nedelin Catastrophe, took place in 1960, before the space age had even begun. It is well known that in the USSR launch decisions were at least as much political as technological, and that it sometimes cost lives: the death of Vladimir Komarov when he flew on a rushed Soyuz 1 is a case in point. But no misguided launch decision cost as many lives as the Nedelin Catastrophe, the deadliest incident in rocketry history. Russian rocket designer Boris Chertok described its impact: “..the first R-16 missile, named ‘article 8K64,’ killed, on average, more people without leaving the launch pad than did any 10 V-2 missiles that struck London during World War II.” This devastation was wrought from an inert missile – no explosives were involved at all. As Chertok described it, the incident was so far outside the norms of spacecraft development that “one cannot explain it using the terminology or classification system of reliability engineering developed for rocket technology.” 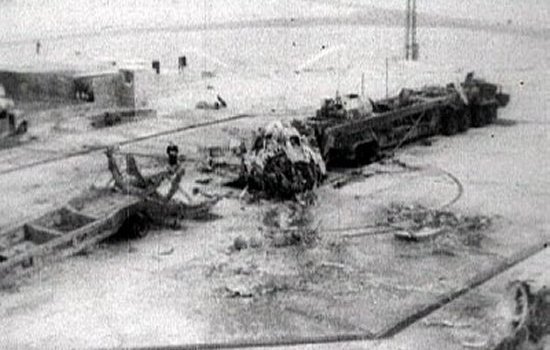 All that was left of the R-16 and its launch pad after the Nedelin Catastrophe (Credits: USSR). 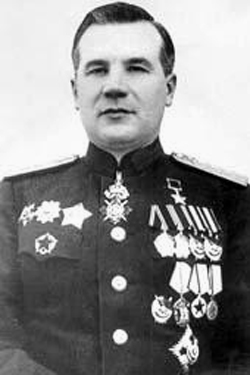 The R-16 intercontinental ballistic missile (ICBM) was the brainchild of Mikhail Yangel. Intended to replace the R-7, R-16 was designed to use non-cryogenic fuels, deemed to be “more practical” because a missile could be readied much more quickly as a result of simpler fueling mechanisms. The selected fuels were UDMH oxidized with a 73% nitric acid/27% nitrogen tetroxide blend, a combination known as “the devil’s venom,” and for good reason.  The fuels are toxic and corrosive in liquid form; when burned, they produce poisonous gas.

Air Marshal Mitrofan Nedelin, commander of the USSR’s Strategic Rocket Forces, was placed in charge of the R-16 development. Looking to score political points by having the rocket ready for the anniversary of the Bolshevik Revolution, Nedelin pressured Yangel and the rest of the R-16 team (some say Yangel was a willing participant here) to accelerate their timetable. They did this primarily by ignoring all of the quite sensible safety measures in effect at the time. The irony is that the missile was considerably ahead of schedule; it had been expected to conduct flight testing 10 months later, in July 1961. However, the high-boiling point propellant camp felt in competition with the cryogenic liquid oxygen camp of ICBM development and wanted to show up lead Soviet rocket engineer Sergei Korolev and his R-9 missile, then under development.

Due to in-fighting in the Soviet rocketry community, Yangel was unable to engage the best man for the job of designing the electrical guidance system for the R-16. Instead of Nikolai Pilyugin, who had designed most of the major guidance systems of the time, Yangel had to make do with Boris Konoplev, a brilliant inventor and expert in radio engineering, but not a very systematic individual. As a result, his systems had seen limited testing when they were first installed into the R-16 and they were accompanied by ambiguous instructions.

A number of electrical system glitches arose, as may have been expected, in the run up to the anticipated October 24 launch from Tyuratam Launch Complex, the predecessor to Baikonour Cosmodrome. Nedelin responded to the glitches by calling for longer hours and more diligent effort from the workforce. By the time October 24 arrived, they had been working for 72 hours straight.

In the video below, a History Channel documentary about the Nedelin Catastrophe.

Building Up a Disaster

Due to the known hazards associated with the R-16’s fuel, there were certain precautions in place to prevent any accident from having catastrophic effects. During fueling procedures, all non-essential personnel were supposed to evacuate the area surrounding the launch pad. Any repairs or configuration changes to the rocket were supposed to be performed on a dry system – without any fuel. In the event, the wisdom of such measures was demonstrated only too well by their absence. Nedelin himself reportedly liked to set up a chair at the pad to watch the proceedings. That’s where he was October 23-24, setting a good example for his workers by being on the spot – and not-so-subtly indicating that they had better be there too.

The engineers responsible for preparing and fueling the R-16 were doing so for the first time. Despite Korolev’s example, Yangel had decided that an engineering model was not needed for the technicians to practice these measures. Whether he based that decision on the desire to save time he thought that the simpler design of the R-16 was more intuitive and needed no practice is not known. In any event, when these workers began preparing the R-16 for launch on October 23, it was the first time they had been put through the procedure. 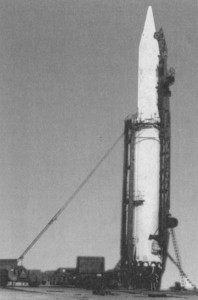 The first R-16 on the launch pad. Nedelin used to sit right where the truck is pictured (Credits: USSR).

The rocket was fueled successfully, and there the checklist stopped. Yangel decided to change the planned procedure to compensate for an unreliable blowout mechanism that no one had stopped to fix. Instead of a reusable valve that could be tested, the R-16 has been designed with a blowout disc that allowed the propellant to flow into the turbopump chambers. This pyrotechnic mechanism was never really perfected and had no reliable monitoring system. Essentially, the operators were never quite sure whether the disc had really ruptured or not. Any single disc could not be tested because they were not reusable. Yet, if the discs did not rupture, the rocket’s engines would not ignite. With this in mind, Yangel decided to make sure the discs ruptured as intended by having technicians crawl into a hatch and listen for the gurgling sound the flowing liquid would make if the discs had blown properly. They wore no protective masks, since masks would obscure their hearing. Had there been a leak, all the monitoring technicians could have died of poisoning. “Chief Designer Yangel and military acceptance committed a fundamental error by clearing the missile for flight-tests when it was already known that the disc opening mechanism was unreliable,” Chertok averred.

With the technicians in place, the order was given to blow the second stage discs. Listening hard for the subtle sound of flowing fluid in the second stage, the technicians were startled instead by a shock and a noise from the first stage, followed by a burnt smell. First stage discs placed to cut off the gas generator had been blown by mistake for the second! Miraculously, no one had been injured yet, although they did find a small fuel leak through the turbopump assembly shaft seal.

This was only the most egregious of a number of problems that occurred during preparation, tied to problems with the control panel, onboard electrical control system, and second stage onboard battery. The onsite State Commission responsible for final decisions affecting launch readiness went into a huddle. Only one individual, the firing range department chief Lieutenant Colonel S. D. Titov felt called upon to recommend the proper procedure: “Drain the propellant components, neutralize the missile at the firing range, and send it to the factory for modification.” Despite a number of individuals present having the stature and knowledge to know better, none of them supported Titov; Nedelin carried the day with the decree to correct the electrical circuits in situ. “We’ll modify the missile on the launch pad,” he reportedly declared. “The nation is waiting for us!”

Continue to Part 2 for the fiery finale of the Nedelin Disaster.