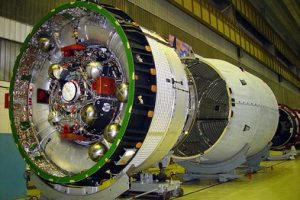 Breeze-M upper-stage prior to mating to its Proton rocket. (Credit: Khrunichev)

With the world’s attention focused on the successful landing of the Mars Science Laboratory on August 6th, little attention was given to the launch of a Proton-M rocket launched from the Baikonur Cosmodrome in Kazakhstan.  The two satellites, Telkom-3 and Ekspress-MD2, were subsequently lost when they failed to reach transfer orbits due to a burn failure of the Breeze-M upper stage. Reportedly, the Breeze-M upper stage was the Phase III variant, a recent upgrade that makes use of two new 80 liter high-pressure tanks to replace six smaller tanks.  The Phase III variant also relocates he command instruments towards the center in order to diminish shock loads when the additional propellant tank is jettisoned.  Notably, the launch of these satellites was delayed several time in May because of problems with the Breeze-M upper stage. The Telkom-3 Satellite, which was built by ISS-Reshetnev and Thales Aleniaspace, was designed to provide bandwidth for the increasing demand from the development of Indonesia’s satellite business service.  In particular, the Telkom Group was to be a primary beneficiary of the satellite.  Telkom-33 marks the first time that Indonesia purchased a satellite from Russia. The second satellite, Express MD2, designed and built by the Khrunichev State Research and Production Space Center under a contract with Russian Satellite Communications Company(RSCC) and Thales Alenia Space of Italy.  The satellite was designed to provide 24-hour data streams to several users of the Russian Satellite Communications and Broadcasting System.  It incorporates 8 C-band-transponders and 1 L-band transponder.  The satellite, which weighed in at 1,140 kg, was expected to have a 10-year service life.  Both satellites were insured by Russian Ingosstrakh and Alfa Strakhovanie.  The two satellites will be monitored to ensure that their orbits do not endanger the International Space Station. In light of the failure, Russian Space Agency Roscosmos will suspend the launches of Proton-M rocket carriers with Breeze-M boosters until an investigative board determines the cause of the failure. This most recent failure is certain to be an embarrassment to Roscosmos and the Russian space program in general especially in light of the successful landing of NASA’s Mars Science Laboratory just hours before the Proton launch.  The failure of the Breeze-M for this launch adds to its list of failures since the end of 2010, including the loss of the Ekspress-AM4 in August 2011, as well as three navigation satellites in 2011. Watch the launch of the ill-fated rocket below: