On June 5, Venus will pass directly between the Sun and the Earth, becoming visible from Earth as a small black disk in front of the Sun. It is a fantastic and rare phenomenon that occurs every 243 years, with pairs of transits eight years apart separated by long gaps of 121.5 years and 105.5 years. Therefore we can say that it is a twice in a lifetime event. Following the transits of 2004 and 2012, the next transit of Venus will be in 2117. 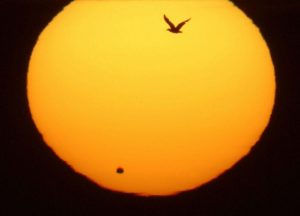 However in 1967, during the peak of the Space Race, NASA considered sending three astronauts on a flyby around Venus, providing them with a unique glimpse of the planet. The mission was developed under the Apollo Applications Program (AAP), a program that envisioned the application of Apollo technology to achieve further milestones within our solar system, such as orbiting laboratories, lunar stations, and manned interplanetary missions.

The mission was planned to launch sometime during the window between 31 October and 30 November 1973, which would offer a quick transit during a time of predicted low solar activity. The spacecraft would arrive at Venus after 123 days, pass 6,186 km above the surface of Venus, and return to Earth after 273 days, in December 1974.

Following the Mariner 2 visit in 1962, NASA’s scientists realized that Venus has a weak magnetic field, an extremely hot surface, and survivable cosmic radiation. The mission design dictated that a modified Apollo spacecraft would be used to transfer the astronauts, after launching on a Saturn V. Basically the main challenge compared to the Apollo mission would be the crew’s safety during the planned 400 day mission. With no need for a Lunar Module on a Venus flyby, the spacecraft would accommodate a larger Environmental Support Module, and consequently a more efficient life support system. Solar panels would provide power to the whole spacecraft. 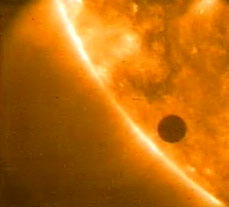 A mission report was prepared by Bellcom, a division of AT&T established in 1963 to assist NASA in research and development, but the mission never became a reality, even though it would have enhanced NASA’s status and showcase the capabilities of the Apollo hardware. Perhaps it can still inspire agencies and space visionaries to ensure a visit Venus long before its next transit in 2117.

In the video below, a four-minute trailer summarizes the history and significance of the transit of Venus while preparing for the June 5-6, 2012, spectacle (Credits: transitofvenus.org).
[youtube http://www.youtube.com/watch?v=_NnlzInn0vE]