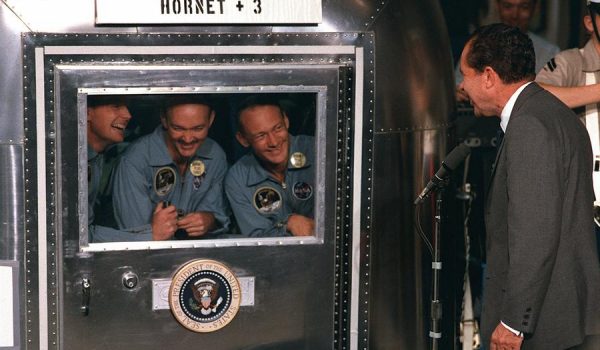 By Staff Writers
On July 20, 2016, the FAA-AST made a favorable payload determination for the Moon Express MX-1E commercial space mission.  The MX-1E is a... 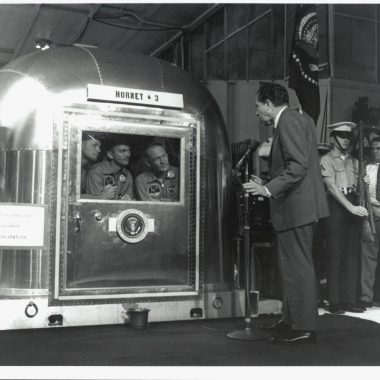 By Tereza Pultarova
As  prospects of a Mars sample return mission or even a manned... 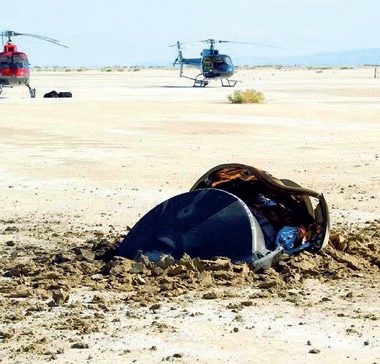 What if There IS Life on Mars? Interview with Margaret Race

By Tereza Pultarova
As prospects of a Mars sample return mission or even a... 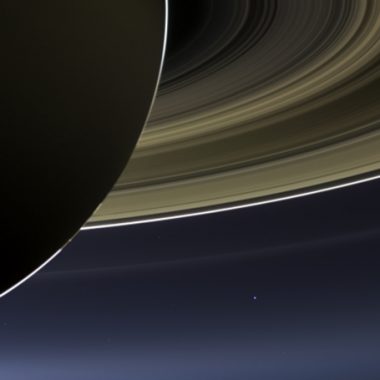 By Phillippa Blaber and Angélique Verrecchia
In 2017 a spacecraft will plunge through the rings of Saturn and... 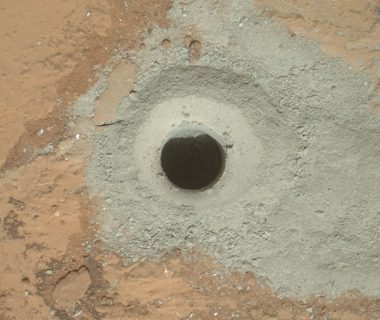 By Phillip Keane
The bore-hole at John Klein, showing the less oxidized grey...

Interplanetary Contamination is the introduction of biological material from one planetary body (planet, moon, asteroid) to another. Biological material can be everything from simple organic carbon molecules via parts of genetic code or proteins up to full microbial life forms.

Why Does Interplanetary Contamination Matters?

Interplanetary contamination is important for both scientific and ethical reasons.

From a scientific point of view, bringing biological material from Earth to another planetary body can severely damage its pre-existing environment and have an irreversible effect on the scientific exploration, especially when searching extinct or extant indigenous life

From the ethical point of view, the Outer Space Treaty states under Article I that,

“The exploration and use of outer space, including the Moon and other celestial bodies shall be carried out for the benefit and in the interests of all countries, irrespective of their degree of economic or scientific development, and shall be the province of all mankind” (UN 1967).

The idea of “province of all mankind” underlines the ethical duty to protect outer space and the celestial bodies, especially from contamination!

When traveling in and out of Hawaii, we must declare on a form all agricultural items we want to bring with us. Some goods cannot be brought into Hawaii without “prior arrangements for permit and/or quarantine, treatments, or certification.” These examples show how we try to control contaminants here on Earth to keep its ecosystem safe.

“Leave the beach as you find it,” reads a typical recommendation to tourists in coastal areas. These guidelines are needed to preserve the quality of the beach for its plants and animals and the ocean itself. This is another perfect example of what is being done for space.

That is exactly what scientists try to do when planning an interplanetary mission to preserve the wellbeing of celestial bodies and ensure a pristine and safe way to explore outer space.

Outer space and the celestial bodies are considered global resources for the benefit of all mankind, therefore it is our duty to legally protect and preserve space and its celestial bodies for everyone and for the bodies themselves. Laws, policies, guidelines, and so on are therefore important tools to ensure to the safety and protection of outer space.

Have we Ever Been Exposed to Contamination Risk?

Forward and Backward Contamination are not just theoretical ideas: in the 60 years of spaceflight history. During the Apollo program, NASA had a Lunar Quarantine Program for the astronauts when they came back from their Lunar missions. Back in the late 1960’s and into the 1970’s NASA was concerned about what the astronauts, hardware, and samples might bring back from the Moon to potentially contaminate Earth. Therefore, each Apollo mission went through a rigorous quarantine process for 30 days to make sure that nothing or no astronaut that came back could – worst case scenario – wipe out the human race via Moon “space germs” or contaminants. 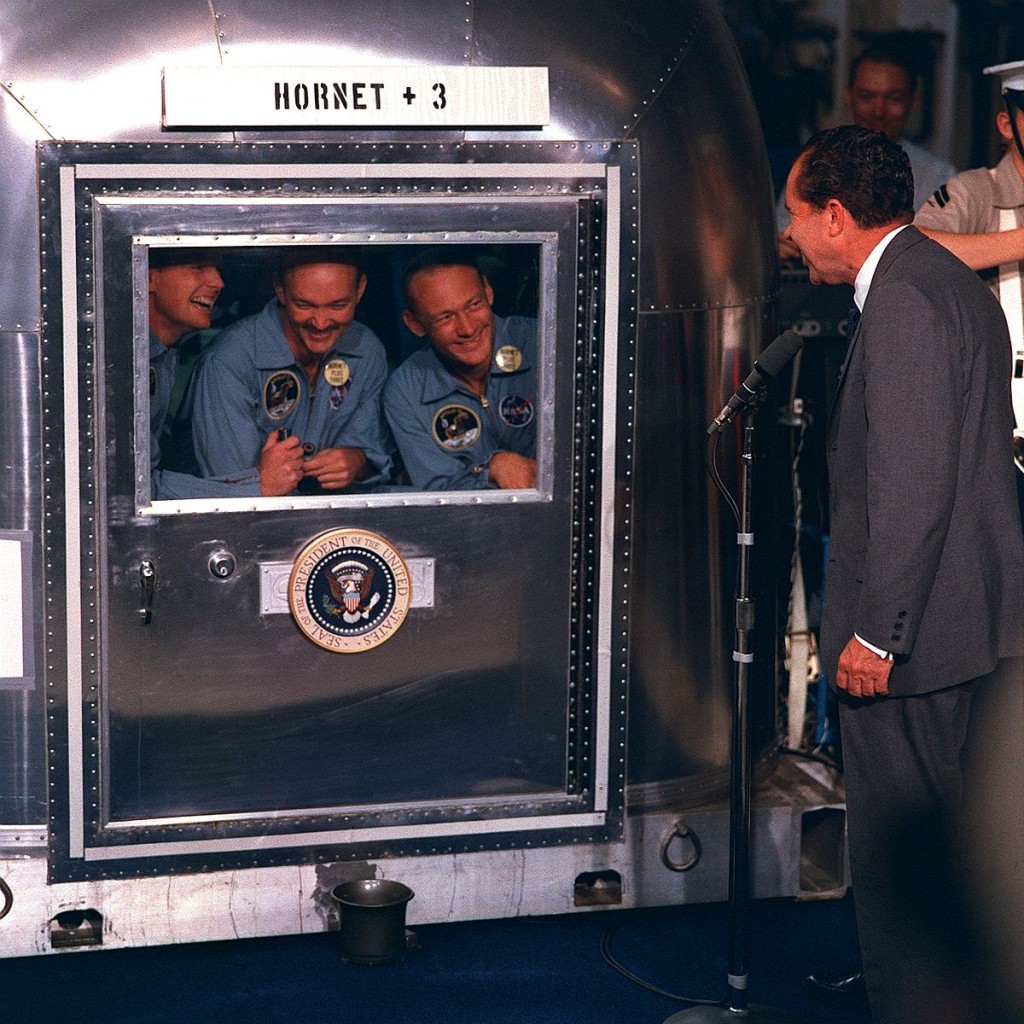 What are the Current Methods for Preventing or Reducing Contamination?

Currently there are several methods to decrease the contamination of planetary bodies by space probes. There are technical aspects, such as the sterilization of all hardware items that will fly on a space mission. Additionally the use of new materials that are less affine to biological materials or have a sterilizing effect can keep the contamination low. However, there is not a 100% way of preventing of transporting microbial life onto a spacecraft. Moreover, the sterilization only kills the life forms, but does not prevent their organic material to be still attached to the space hardware.

Therefore, another approach is to create a preflight study that considers what types of biological materials or microbes are still attached to the space hardware. The material may even be marked, enabling the ability to distinguish terrestrial from extraterrestrial material later on. Human spaceflight missions to other planetary bodies will surely contain a lot of organic material, like the organic molecules exhaled or transpired via the human metabolism, dead skin cells, human waste, and of course a multitude of different microbes that the human body carries.

While working with samples collected on another planetary body, there is a high risk to contaminate samples with cells, microbes or organic material coming from our own body. To reduce these risks we can optimize the work process to have as little contact as possible with the sample, and use tracers to track the path of possible contamination. If you find tracers on your probe, you know for sure that contamination has happened and that the organic compounds on the probe are most likely your own.

All of these methods have their limitations, and therefore they will never be 100% secure, but they can drastically reduce the risk of contamination.

In the video below, the Space Assembly Facility clean room at NASA’s Jet Propulsion Laboratory, the Mars Science Laboratory rover Curiosity was sterilized before its mission to Mars.

States Parties to the Treaty shall pursue studies of outer space, including the Moon and other celestial bodies, and conduct exploration of them so as to avoid their harmful contamination and also adverse changes in the environment of the Earth resulting from the introduction of extraterrestrial matter, and where necessary, shall adopt appropriate measures for this purpose (UN 1967).

The Committee on Space Research (COSPAR) has created the COSPAR Planetary Protection Policy that is in line with and follows the Outer Space Treaty.

While connected to a legally binding treaty, the COSPAR Planetary Protection Policy is not itself a legally binding treaty—rather a set of guidelines on contamination that spacefaring nations should follow when considering space exploration. Within the Policy, there are five categories for “target body/mission type combinations” with increasing contamination implications: fly-bys, orbiters, landers, probes, non-Earth returns, and Earth returns. 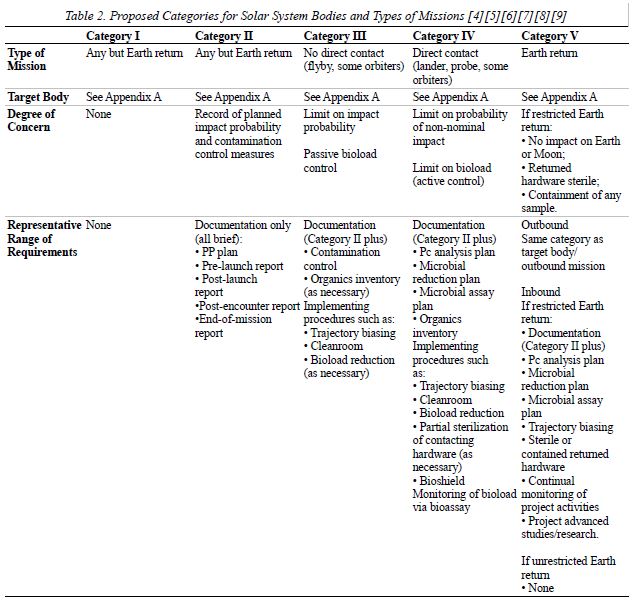 The COSPAR Planetary Protection Policy table on the proposed categories for solar system bodies and types of missions. – Credits: COSPAR

According to the Policy guidelines there is a bigger risk to contaminate Mars (Category IV on Policy scale) than to contaminate a celestial body that does not have the potential to harbor life such as the Moon (Category I on Policy scale). On the other hand, if these same mission to Mars and to the Moon return to Earth, they are both considered a Category V, the highest level in the scale, because of potential backward contamination risk.

These guidelines have been conceived to attempt keeping both the celestial bodies – especially those with plausible presence of life – and Earth safe from contamination from another celestial body.

From the perspective of States, outer space contamination policies fall under the responsibility of their respective space agencies. For the United States, NASA has a Planetary Protection Committee under the NASA Advisory Council which “includes programs, policies, plans, hazard identification and risk assessment, and other matters pertinent to the Agency’s responsibilities for biological planetary protection.”

Additionally NASA has the NASA Policy Directive (NPD) 8020.7G: Biological Contamination Control for Outbound and Inbound Planetary Spacecraft and the NASA Procedural Requirements (NPR) 8020.12D: Planetary Protection Provisions for Robotic Extraterrestrial Missions, both aligned with the COSPAR Planetary Protection Policy and the Outer Space Treaty. The United States also has the Space Studies Board of the National Research Council that “in recent years…has provided recommendations on planetary protection requirements for Mars, Europa, and sample return missions from a variety of small solar system bodies such as moons, comets, and asteroids.”

For Europe, ESA has a Planetary Protection Officer who oversees “efforts to prevent microbial lifeforms hitching a ride on missions to other planets and moons in our Solar System.” ESA also has the European Cooperation for Space Standardization (ECSS), which has standards for ESA and it’s spacefaring nations.

In the video below, a discussion on the Juno spacecraft and its crash onto Jupiter for the sake of planetary protection.

Are There More Challenges for Interplanetary Contamination?

In the far future interplanetary and even interstellar contamination might become a threat to spread infections or aggressive life forms into a new environment that is not prepared for them.

All the recent plans to explore, colonize, and establish mining outposts on planetary bodies, especially on Mars, pose a severe contamination threat. If conducted carelessly, these operations can irreversibly damage the pristine environment of the planetary bodies. The search for extraterrestrial life might become impossible, and humankinds’ oldest question if there is or has been life on other worlds might remain unanswered.

From another perspective, a further challenge for contamination prevention is the provision of adequate laws and policies. The Outer Space Treaty is becoming inadequate to the upcoming challenges in this field. Article IX is the only one that discusses contamination, and the treaty does not consider private spacefaring entities at all.

As space is becoming more and more privatized, colonization and mining opportunities in space are following suit. Currently the Outer Space Treaty does not precisely cover these issues, leaving the preservation of celestial bodies from contamination from these new actors an unsolved problem.

– By Lauren Napier and Sebastian Hettrich.