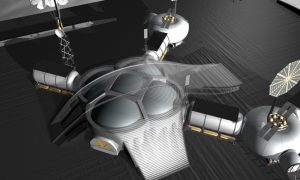 On 26 February 2013, architecture firm Architecture Et Cetera (A-ETC) announced their concept of for a 3D-printed Moon base that can be built with lunar dust (regolith). The concept promises a sustainable human habitat on Lunar South Pole.

Project SinterHab was initiated at the International Space University by space architects Tomas Rousek, Katarina Eriksson, and Dr. Ondrej Doule in collaboration with Richard Rieber from NASA JPL in 2009. The concept proposes construction of a lunar base using microwave sintering and contour crafting with aid of a NASA JPL robotic system, near Shackleton crater (lunar South Pole). 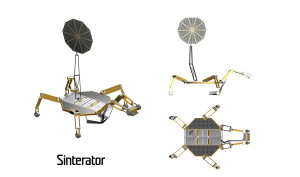 Sinterator, the microwave sintering apparatus that can build blocks from regolith (Credits: NASA).

Sustaining the lunar dust at a high temperature  – 1200-1500 0C – but below its melting point, creates bonds between particles, forming solid blocks from which the lunar base can be created. Microwave sintering creates a solid building material similar to ceramics only by microwave heating of the dust. The process doesn’t require any construction material to be carried from Earth, unlike regular 3D printing which requires a binding agent to combine with the lunar regolith. The complete local-sourcing of materials reduces the cost of the mission significantly.

The SinterHab construction process is based on the Microwave Sinterator Freeform Additive Construction System (MS-FACS), proposed by scientists at NASA JPL, and a large six-legged multi-purpose robot called ATHLETE (All-Terrain Hex-Limbed Extra-Terrestrial Explorer)  equipped with a microwave printer to create walls and domes.