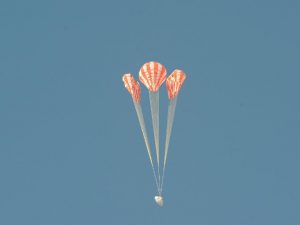 Engineers rigged one of the test capsule’s three main parachutes – the middle parachute in this view – to skip one stage of inflation (Credits: NASA).

NASA successfully tested two types of parachute failures with a mock version of the Orion Spacecraft on May 1.

“The tests continue to become more challenging, and the parachute system is proving the design’s redundancy and reliability,” said Chris Johnson, NASA’s project manager for the Orion parachute assembly system. “Testing helps us gain confidence and balance risk to ensure the safety of our crew.”

The tests were conducted at U.S. Army Yuma Proving Grounds, in Arizona, to certify Orion’s parachute system for carrying humans.  During the tests, the Orion capsule faced two different failure conditions. The mock model, after being extracted from an Air Force transport flying at 7,600 meters, reached about 400km/h before the deployment of the parachute. In the first test, one of the capsule’s two drogue parachutes was altered not to deploy and in the second test, one of its three main parachutes was set to skip its first stage of inflation. Drogue parachutes are used to slow and guide Orion, while the main parachutes inflate in three stages to gradually slow the capsule during the descent.

Below, the parachute failure test performed on May 1.

Orion’s parachute system is the largest ever built for a human-rated spacecraft.  The canopies of the three main parachutes have a diameter of about 35 meters while the two drogues are large 7 meters.  After reentering Earth’s atmosphere, the parachutes are supposed slow the spacecraft for a splashdown in the Pacific Ocean.

The Orion parachute system had already undergone eight prior tests, between December 2012 and February 2013, in different failure conditions.  The tests demonstrated safe landings both with malfunction of the main parachute and deployment failure of the drogue.

The next step is scheduled for July, with a new Earth-based parachute test, when the capsule will be released from 106 km.  The parachutes’ first test after traveling in space will be during Exploration Flight Test-1 in 2014. An Orion capsule with no crew aboard will be returned traveling at about 540 km/h before the parachutes deploy.