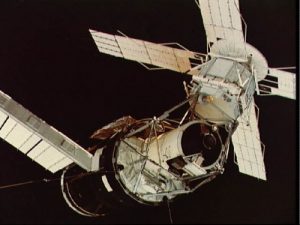 Skylab, as seen by its second crew in 1973. America’s first space station celebrates its 40th anniversary this year and will be honored at an Astronaut Scholarship Foundation gala this month (Credits: NASA).

The surviving members of the three Skylab prime crews are scheduled to be on hand at this gala event; they include Joseph Kerwin, Paul Weitz, Alan Bean, Owen Garriott, Jack Lousma, Gerald Carr, William Pogue, and Ed Gibson.

Carr, who along with his crew spent 83 days aboard Skylab, discussed his pride in the legacy of America’s first space station: “Wow! I lived to see the 40th!” joked Carr. “Seriously, I’m proud to see what the legacy of Skylab has been. We pretty much proved that humans can live in weightless conditions for a long period of time without serious physical degradation, as long as they exercise regularly and vigorously. With that sense of security, people can focus on the business of productively conducting science on orbit, which advances our understanding of ourselves and the world around us.”

After nearly 40 years, Carr still remembers the sights of his mission fondly, especially watching the Earth go by.

He recently said in an interview for The Space Show: “The most memorable [reminiscence] is … the view of the Earth from space that I didn’t anticipate finding. It was one of those very moving experiences you just never forget.”

In addition to Skylab’s prime crews, the crew of SMEAT (Skylab Medical Experiment Altitude Test) will be on hand, which includes Robert Crippen, Karol “Bo” Bobko, and William Thornton. Vance Brand, who was in line to command a Skylab rescue mission, is also scheduled to appear.

In addition to the dinner, guests will share a table with an astronaut. Prior to the event, guests can mingle alongside the heroes at a champagne social. Guests will be able to savor their memories, as they will receive a print alongside the Skylab astronauts, a CD of imagery from the event, and a DVD of the Skylab discussion program. Private transportation will be provided from the guest hotel, the Radisson Resort at the Port, and Kennedy Space Center Visitor Complex. In addition, guests can enjoy breakfast with the astronauts at the Radisson on the morning of Sunday, July 28.

Space is limited to 75 guests, and tickets are issued on a first-come, first-serve basis. Admission is $750. The price of admission will benefit ASF’s scholarship programs. To secure your space, visit ASF’s Astronaut Store online or via phone at 321-455-7014.

Skylab celebrated the 40th anniversary of its launch into low-Earth orbit in May of this year. Between May 1973 and February 1974, the United States’ first space station housed three crews and advanced discoveries in the fields of earth science, space medicine, and solar science. Skylab helped to bridge the gap between Apollo and the space shuttle program, allowing astronauts and scientists alike to discover what it was like to live and work in space for long periods. It paved the way for the long-duration spaceflights that are currently taking place aboard the International Space Station.