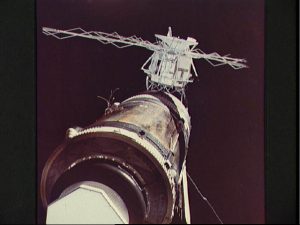 Although the deployment of the Apollo Telescope Mount (ATM), in the background, was considered relatively complex in terms of its criticality, no one could have foreseen that Skylab’s solar arrays and micrometeoroid shield would almost ruin the mission. In this view from Pete Conrad’s crew, the tattered wiring and tubing from the torn solar array are clearly visible (Credits: NASA).

Four decades ago this week, America almost lost its first space station. On the morning of 14 May 1973, the last in a generation of Saturn V boosters sat on Pad 39A, ready for its journey into space. Visually, it was quite distinct from its predecessors, possessing two stages, instead of three, and in place of what would have been the final propulsive stage was Skylab, capped off by a bullet-like aerodynamic shroud. To this day, the Saturn V remains the largest and most powerful rocket ever brought to operational status, and as it entered the final hours before its last launch, it could enjoy an almost unblemished reputation: its 12 previous missions had never failed to complete their primary objectives. The ominous, brewing clouds at Cape Kennedy carried much menace, but everyone knew the Saturn’s reliability: its muscle had sent men to the Moon on nine occasions, and for its final swan song there was every expectation that it would perform with perfection.

The behemoth Saturn had been sitting on the pad for a month, undergoing checks and countdown simulations. NASA was keenly aware that the success of Skylab was totally dependent upon the success of the launch, and if anything went awry it was unlikely that Congress would stump up the $250 million needed for another attempt. The station’s first crew—Pete Conrad, Joe Kerwin, and Paul Weitz—were on hand to watch the station spear for the heavens, and tomorrow, on 15 May, they would blast off atop a Saturn IB rocket for a 28-day mission. Precisely at 1:30 p.m. EST, the five mighty F-1 engines of the Saturn V’s first stage thundered to life, raising the question in everyone’s mind: had the rocket risen or had Florida sunk? Conrad had flown one of these mechanised monsters to the Moon and instinctively braced himself for the immense wave of sound that washed over him, the pummelling of the soles of his feet, and the intense vibration. At length, the lumbering Saturn cleared the tower and vanished into a deck of thick, iron-grey cloud, trailing an immense tongue of golden flame.

Skylab was on its way.

The Saturn V, which launched Skylab, was visually quite distinct from its predecessors. Although it possessed the S-IC and S-II first and second stages, the place of the third stage (S-IVB) was taken by the inert space station (Credits: NASA).

“It looked great,” Kerwin wrote in his book, Homesteading Space, and fellow Skylab astronauts Owen Garriott and Jack Lousma quickly headed to Patrick Air Force Base to pick up a T-38 jet for their return to Houston. Garriott and Lousma were due to fly the second mission to the space station in the late summer of 1973. As they walked towards their rental car, they happened to meet Rocco Petrone, the head of NASA’s Marshall Space Flight Center, who advised them of “a few telemetry glitches.” The two astronauts did not ponder on Petrone’s words, and as they left Patrick and gained altitude, they had every hope that Skylab would soon be ready to accept its first astronaut visitors.

A minute after launch, the Saturn had gone supersonic and, shortly thereafter, passed through a period of maximum aerodynamic turbulence—nicknamed “Max Q”—during which atmospheric forces on the vehicle reached their most severe. It was a few seconds later that telemetry data indicated something was not right. The data almost went unnoticed, but indicated a premature deployment of Skylab’s protective micrometeroid shieldand its No. 2 solar array. If the telemetry was for real, and was not an instrumentation error, it signalled very bad news and meant that both shield and array were as good as lost and the future of the mission thrown into doubt. For now, however, the assumption was made that it was nothing more than a spurious signal.

For a while, it seemed that the assumption was correct. The Saturn was flying perfectly, its second stage picking up the thrust for the final boost into low-Earth orbit, and at 1:40 p.m. the space station was released at an altitude of 430 km, about 1,800 km downrange of the Cape, high above the Atlantic Ocean. The bullet-like shroud separated and at 1:47 p.m. electric motors rotated Skylab’s massive Apollo Telescope Mount (ATM) out 90 degrees, locking it into place and deploying its windmill of four solar arrays. Before the mission, the successful deployment of the ATM had been a lingering concern … and it had been executed without a whimper. In the euphoria of those first few minutes in orbit, the mysterious bit of telemetry about the micrometeoroid shield and No. 2 solar array almost went unnoticed. 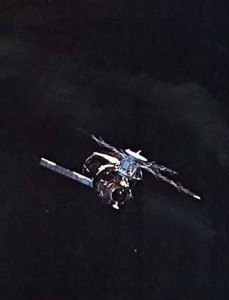 The first view of Skylab in orbit was disheartening for Pete Conrad, who had headed the astronaut office’s Skylab Branch (and been nicknamed ‘Sky King’) since 1970. One solar array was gone, the other was jammed and the lost micrometeoroid shield placed any prospect of a successful repair in jeopardy (Credits: NASA).

An hour later, Flight Director Don Puddy noticed erratic signals from the station. By that time, the solar arrays should have unfurled, but the data was confusing. Controllers expected their monitors to show both arrays producing around 12.4 kW—about 60 percent of Skylab’s electricity—but were dismayed to learn that power levels were much,much lower … a mere 25 watts! The data indicated that the arrays had released, but had not fully extended, whilst temperature levels implied that one of them had either been torn away or had suffered severe structural failure. A virtual absence of voltage supported this nightmare scenario. As engineers watched their data over the next few hours, they concluded that, indeed, the micrometeoroid shield had failed and a malfunctioning solar array had led to a power outage. Off-duty flight director Phil Shaffer quickly set to work on a “malfunction list” to handle all the problems which were now flooding into Mission Control … and quickly found himself with nearly 50 items, all of which were critical to the survival of Skylab!

The micrometeoroid shield had a secondary duty to provide thermal control; its external face carried a black and white pattern to absorb heat, whilst its internal face and the hull of the station itself were covered with gold foil to regulate the heat flow between them. As long as the shield stayed in place, the system would have kept Skylab on the cool side of the comfort zone … but now that it was gone, or disabled, the gold would begin to absorb heat and render the station uninhabitable. Sensors indicated external temperatures of 82 degrees Celsius and, inside, around 38 degrees Celsius. Thermal engineers were already predicting that these would soon climb further to 165 and 77 degrees Celsius, respectively, endangering the astronauts’ food stocks, camera film, and perhaps even the structure of Skylab itself.

There were other dangers, too. Under such high temperatures, materials inside the station could “outgas,” producing contaminants which might suffocate a crew of astronauts. Lining the interior walls was a thick layer of polyurethane foam and fibreglass, one of whose constituents was a particularly nasty chemical, known as “toluene diisocynate,” which is today listed as one of the dozen most hazardous substances to human health. At temperatures of around 199 degrees Celsius, it would begin to break down and release toxicity into Skylab’s atmosphere. In the days that followed, a set of gas-sampling tubes were prepared for Pete Conrad’s crew to measure the levels of toluene before entering the station.

Within eight hours, NASA cancelled the scheduled 15 May launch of the first crew. The countdown clock, which had been halted at T-minus 14 hours and 35 minutes, was recycled to T-59 hours and held there, indefinitely. Based on Skylab’s orbital geometry, launch opportunities arose every five days and Conrad’s crew was rescheduled to fly no earlier than the 20th. The primary option at this stage was for the astronauts to fly a 17-day “nominal” mission and spend the final 11 days performing “minimal activity” to gather the required four weeks of medical data.

Yet even this plan was fraught with risk, as the situation aboard Skylab worsened. In order to produce electricity, the station had to remain in a “solar inertial” attitude, with the Sun’s rays perpendicular to the ATM panels … butthis exposed the full length of the hull to excessive overheating. Mission Control reduced the problem for a while, by pointing the front end of the station directly towards the Sun, which lowered temperatures … but also caused power levels to drop precipitously. The best compromise, it was found, was to pitch Skylab “upwards,” by about 45 degrees, towards the Sun. This allowed just enough sunlight to illuminate the ATM panels and charge their batteries, whilst also stabilising internal temperatures at a balmy 42 degrees Celsius. Conversely, temperatures in Skylab’s airlock now dropped and threatened to freeze heat exchangers and coolant loops by 18 May. Manoeuvres to warm the airlock were successful, but at the expense of overheating the rest of the station.

The resultant problem of maintaining a fine balance between temperature and power proved incredibly difficult and intricate. Several of Skylab’s rate gyroscopes—needed for basic attitude control—overheated, whilst others produced random errors, and propellant was being used in far larger quantities than intended. “They played this attitude-control game for ten days,” wrote Joe Kerwin of the thermal engineers’ sterling efforts, “and hosed out a lot of the precious propellant on the workshop, which could not be replenished. I think we had used 60 percent of it by the time we arrived, after ten days.” To the astronauts, that was a scary prospect, for Skylab was designed to spend a year in orbit, and support three crews.

The arrival of Conrad and his men could not come soon enough … but before they could go anywhere, the first days of their mission and a whole plethora of repair methods would have to be developed and extensively tested. The speed and excellence with which that work was conducted transformed May 1973 from a month of despair into a shining example of NASA’s can-do spirit.

Stay tuned for the sequel: The Plan to Save Skylab