This is the final installment of a four part series on the final Skylab mission. Follow the link to Catch up on Part 1, Part 2, and Part 3.

Forty years ago, in November 1973, NASA launched its third and final crew to the Skylab space station. As recounted in last week’s history articles, Commander Gerry Carr, Science Pilot Ed Gibson,and Pilot Bill Pogue were tasked to complete a mission of at least 60 days, open-ended to 84 days, either of which would produce a new world endurance record. The enormous success of Skylab’s first and second crews—who repaired and revived the crippled station, then went on to accomplish 150 percent of their science goals—imbued NASA with a false sense of confidence that it could fully load the final crew with an excessive amount of work. As circumstances would transpire, the experience of Carr, Gibson, and Pogue would teach the agency to regard long-duration spaceflight in a quite different manner to its earlier, shorter-duration missions.

As recounted in yesterday’s article, an initial bout of space sickness, suffered by Pogue shortly after arrival in orbit, and several weeks of intensive, minute-by-minute scheduled activities—which Gibson later described as “nothing but a 33-day fire drill”—gave way to a heart-to-heart between Carr and Mission Control, in which the overloaded timeline was relaxed a little. Although it unfairly tarnished the crew as the first in history to stage a “space mutiny,” the stand actually made the remaining few weeks of the 84-day mission considerably more pleasant and productive for the astronauts.

With terse exchanges going on between space and the ground, it might at first glance seem surprising that another EVA by Carr and Gibson was undertaken on 29 December, acquiring more photography of Comet Kohoutek and collecting samples from the micrometeoroid cover of Skylab’s airlock. Central to the photography effort was the far ultraviolet camera, built by the Naval Research Laboratory. Like many disappointed observers back on Earth, the astronauts could hardly describe the long-haired messenger as brilliantly spectacular, but Carr was impressed, nonetheless. “It was so faint,” he told the NASA oral historian, “that we really had to work to find it. Once we did find it, we observed a gorgeous thing: small, faint, but gorgeous.” Still, although he and Gibson shot as much film as they could during their three and a half hours outside, they privately doubted that it was sensitive enough to record sufficiently good data. Over the next few days, from inside the workshop, the best results came from the ATM’s coronagraph … and, interestingly, from a series of pencil sketches by Gibson himself, today enshrined within the hallowed precincts of the Smithsonian. 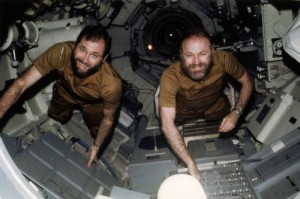 Whilst Ed Gibson elected not to grow a beard during his mission, his two crewmates, Bill Pogue (left) and Gerry Carr opted for the “Hairy Monster” look (Credits: NASA).

With the dawn of the New Year, 1974, much of the comet-hunting on the ground had come to an end and there was much disappointment that Kohoutek had not lived up to its media-hyped billing. Journalists started calling it the “Flop of the Century,” ignoring the scientific yield and focusing only on its brightness as a marker of significance, but in reality the fault lay fairly and squarely upon their shoulders, for it was the media which treated Kohoutek as a sure thing, a dead cert, right from the outset. In March 1974, Sky & Telescope glumly told its readers that, whilst professional astronomers were jubilant with their observations, “the general public wondered what had happened to the spectacle promised by the news media.”

If the media were disheartened at the start of 1974, the crew aboard Skylab considered the last six weeks of their mission to be much more satisfying than the first six. Work aboard the orbiting laboratory was pleasurable, at last, and fleeting moments of joy and humour came from regular contact with loved ones back on Earth. On one occasion, Gibson described for his wife and their children the beauty of watching fires along the coastline of Africa. He hoped that they would be hanging excitedly onto his every word … until Julie, his youngest daughter, asked her mother if she could go outside and play! On another occasion, Pogue was disturbed by a message from his wife, alerting him that she had received a letter, providing information that her husband’s life insurance policy was about to expire. Pogue was particularly irritated, since he had requested the possibility of making a three-month pre-payment into his policy, before launch, to cover the time that he would be away … and was told that pre-payments were not possible, but assured that the policy would remain effective throughout his mission.

In the days preceding their launch, Carr’s crew was tentatively scheduled to return home in the early part of January 1974, after around 56-59 days, but the assumption was that extensions would be considered on a weekly basis, depending upon consumables and the good health of the astronauts. These extensions came thick and fast through the month of January. Three days before they were due to break the 59-day record set by Al Bean’s team, NASA officially extended them to at least 63 days, with Skylab Program Manager Bill Schneider praising their “good spirits,” their “excellent physical condition,” and the “good shape” of Skylab itself. 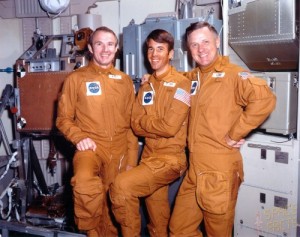 Astronauts Vance Brand, Bill Lenoir, and Don Lind served as backups for both the second and third Skylab crews and might have flown the 21-day fourth mission, had it been approved (Credits: NASA).

It was a dramatic change and remarkable turnaround from the exhausted trio of spacefarers who had struggled to keep up with the timeline a few weeks earlier. Another extension pushed their mission to 70 days, with splashdown rescheduled for no earlier than 24 January, then further into the first week of February, and finally settling on the 8th. “The last six weeks of the flight were very pleasant for me for two reasons,” Bill Pogue remembered in his NASA oral history. “One, we’d achieved the skill level sufficient to do the job quickly and accurately, and second, I no longer suffered from the head congestion that had plagued me for about the first six weeks.” As they neared the 12-week limit, Pogue even hinted that NASA Administrator Jim Fletcher wanted them to spend anadditional 10 days aloft, but mentally the crew were ready to come home and, besides, the consumables aboard the workshop were almost exhausted.A potential fourth Skylab visit, lasting three weeks and possibly crewed by Vance Brand, Bill Lenoir, and Don Lind, was unlikely to ever take place. It had been considered as an option early in the spring of 1973, but, according to spaceflight historian Dave Shayler in his book Skylab: America’s Space Station, “proceeded no further than coffee-table discussions.” Had it flown, one of its primary functions would have been to mothball the workshop and perhaps conduct a few more experiments. However, the extension of Carr’s mission by a month past its original 56-day mandate sufficiently maximized the scientific return from Skylab and eliminated the need to launch a costly additional flight. On 3 February 1974, Carr and Gibson performed the final EVA from the station, retrieving the last of the film from the Apollo Telescope Mount (ATM) and gathering other material samples for return to Earth and subsequent analysis.

Five days later, the time was upon them to leave. No more crews were expected to occupy the station, although there was a faint hope that a space shuttle might someday visit, perhaps to re-boost it into a higher orbit for possible future use. For that eventuality, Carr, Gibson, and Pogue left a sort of time capsule—a variety of material samples, held inside the station, but kept in vacuum, since Skylab was depressurized shortly after their departure—which a subsequent crew might collect. However, there was little time to ponder. Frozen urine samples had to be stored aboard the command module, as did the material science samples and the film cassettes from the ATM and other equipment. The men went about their tasks with enthusiasm, finally undocking and performing a flyaround inspection of their old home, then firing the service module’s engine to depart for the last time.

With Skylab now gone from their immediate lives, the crew duly jettisoned the service module … and ran straight into a problem. “I looked over at Gerry as he was moving the hand controller,” explained Pogue, “to get the right entry attitude, which we absolutely had to be at for re-entry to avoid landing in the wrong location or being cremated before our time … and nothing was happening.” He advised Carr to “go direct”—to go to the hard stops on the hand controller, bypassing all the black boxes and putting the “juice” directly to the solenoids controlling propellants in the reaction control thrusters. Fortunately, directness worked and re-entry proceeded without further difficulty. It later became clear that in the gloom of orbital darkness, Carr had mistakenly pulled the circuit breakers for the command module, instead of the service module. “It was dark,” Pogue concluded, “and he just pulled the wrong ones. But it turned out fine.” 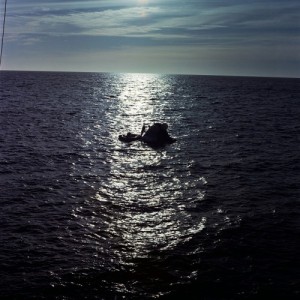 In the beautifully calm waters of the Pacific, the command module of the final Skylab crew bobs gently after 84 days in space. (Credits: Joachim Becker/SpaceFacts.de).

Descending through the steadily thickening atmosphere was truly spectacular. Ed Gibson likened it to travelling through a purple neon tube of gradually increasing brightness and intensity, and as the forces of extreme deceleration increased, a white-hot sheet of flame enveloped them. They were no longer in a neon tube; they were in a blast furnace. From the center seat, Gibson could see the command module’s thrusters pulsing as the computer actively guided them toward their splashdown point, a little under 186 miles (300 km) southeast of San Diego. Less than 3 miles (5 km) away, steaming toward them, was the helicopter carrier U.S.S. New Orleans, their prime recovery ship.

Splashdown, when it finally came, was into a thankfully calm sea, with virtually no wind, although the command module quickly assumed the inverted “Stable 2″ position. Within moments, though, the flotation bags around the spacecraft’s apex inflated and bobbed it over into the Stable 1 configuration required for the recovery operation. Helicopters hovered nearby and frogmen were soon in attendance. Dawn had barely broken in the Pacific and the final Skylab crew were safely home. They had left Earth as NASA’s first team of rookie spacefarers in almost a decade … and had returned as world record-holders, having jointly secured an impressive mission of 84 days since their November liftoff. None of them felt seasick, although the sensation of weight was strong; Gibson could feel his head on his shoulders and it took great effort simply to move his arms, but all three men could be thankful and deeply satisfied that their long mission had ended in fine fashion.As circumstances transpired, no shuttle visit to Skylab ever took place, although plans were afoot to conduct one. Delays in the development of the reusable spacecraft, and an unexpectedly fierce bout of solar activity, conspired to bring Skylab back into the atmosphere in a largely uncontrolled re-entry in July 1979. And thus ended America’s first foray into the space station business. Skylab had proven a tremendous success and, in some minds, a wasted opportunity, for its potential applications alongside the shuttle in the 1980s and as the basis for an “earlier” International Space Station could have been profound.

Feature image: Spectacular view of Skylab, as seen from the departing crew of Gerry Carr, Ed Gibson, and Bill Pogue on 8 February 1974. This would be the last occasion that Skylab was ever seen, up close, by human eyes (Credits: NASA).