Space. It’s vast. It’s majestic. It’s so big it defies comprehension and, occasionally, description. But what if space were full of people? People with smartphones? What if there were communities teeming with people living, working, and playing up there? They’d probably have lots to say about their experiences in orbit amongst the space colonies scattered across the high frontier.

Fair reader, you’re in luck. I have traveled to the future and obtained a representative sample of tweets from space. What follows are some examples of what humans might say about their lives in future space settlements: 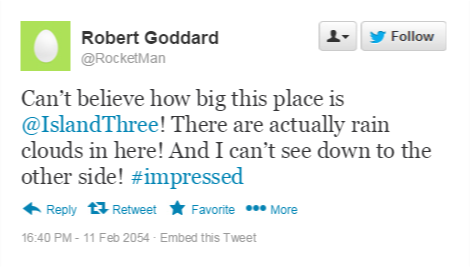 Can’t believe how big this place is @IslandThree! There are actually rain clouds in here! And I can’t see down to the other side! #impressed

Colonies will be big

Space colonies will be big – much bigger than contemporary ”tin-can” space stations like the International Space Station or Tiangong-1. The latest space colony design, Kalpana One, envisions a cylinder 250 meters in diameter and 325 meters long – about the size of some of the largest cruise ships today. Kalpana One can accommodate 3,000 people living in a business park-like setting. This is a small space settlement – some of the larger designs are kilometers long and can host hundreds of thousands of people along with plenty of space for forests, farms, lakes, and rivers. All of these structures can be built in space using the same kinds of proven techniques that for decades have been used to construct massive supertankers in shipyards here on Earth. The challenge is getting the labor and raw materials to start the first community. Perhaps we should check the help-wanted ads… 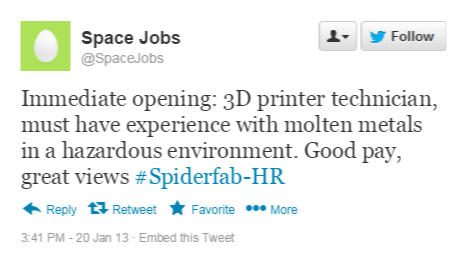 The primary reason existing space stations are so small is that they are built on Earth and launched into space on rockets. And rockets are expensive – it costs over $4,000 to launch one kilogram into space on the cheapest rocket available today. But future space colonies will not be built on Earth and launched into space. In-situ raw materials – collected primarily from asteroids – will be refined and shaped into the beams, panels, and windows that will form the settlement. Just like sailing ships carried shovels and axes to the New World instead of log cabins and farm silos, rockets for the next wave of space exploration will be used to carry the tools that will build settlements – not the settlements themselves.

– In the video below, a bird-eye tour inside a space colony.

Currently, thousands of support personnel on Earth work to launch a handful of people into space. That is set to change as launch companies develop rockets that require only a handful of support staff. Better launchers and lower labor costs mean rockets can launch more frequently, making them both safer and cheaper. Soon, a minority of people on Earth will work to support thousands of people living, working, and playing in space. And all those people will need to eat. Are you getting hungry? Let’s see what’s on the menu in orbit… 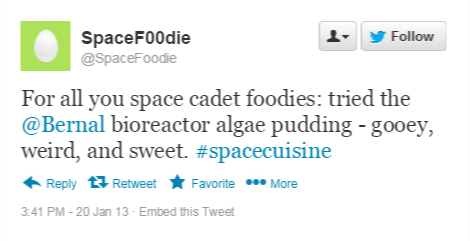 Many people enjoy the novelty of freeze-dried, packaged space food (remember “astronaut ice cream” when you were kid on those trips to the museum?) but few people would want to eat that for the rest of their lives. Luckily, space colonies will have the capability to grow fresh food. In fact, space settlements will be required to grow much of their own food because of the size of their populations and the exorbitant cost to ship food up from Earth. The unusual space environment and unique architecture of space colonies will allow for extremely productive agriculture. First, the Sun shines all day in space, allowing for major energy inputs into production. Second, irrigation, fertilization, sowing, and harvesting will be tightly controlled and integrated into the architecture of the settlement. Third, pests, weather, and other Earth-bound agricultural problems will not afflict farming in space. All of these factors will combine to supercharge food production in space colonies. 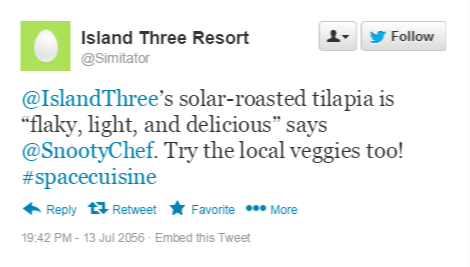 So, we’ve arrived, we’ve got a good job, and we’ve got plenty of food to eat. But what is there to do for fun in space? Contemporary space tourism companies are betting that people will pay millions of dollars to simply look out the window at Earth and spin around in zero-gravity for a few days or weeks. While that may appeal to some, most people are likely to quickly bore of it and start looking for more. Recreation in a space settlement will offer many more options than what current space tourism provides. Spherical pools floating in mid-air, piloting an actual starfighter, and literally flying like a bird are just a few of the possibilities…. 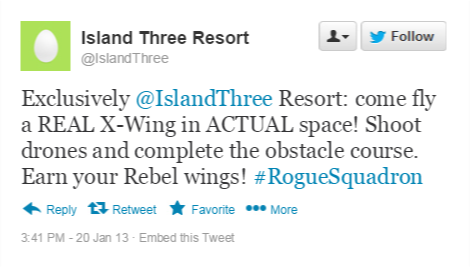 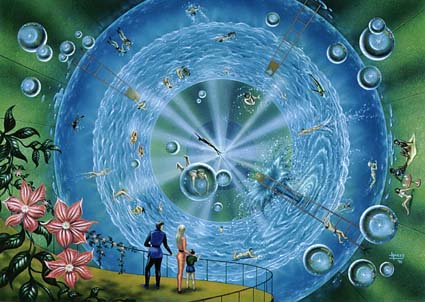 A sphere of liquid floating in zero gravity makes for an interesting swimming pool (Copyright ©David A. Hardy/AstroArt.org)

That was fun but space colonies can serve a higher purpose than merely offering sustenance, or recreation. Throughout history there are numerous instances of people with similar religious or philosophical leanings banding together to form communities where they can pursue their interests without interference. Space colonies offer the ultimate refuge for communities seeking peace and isolation. 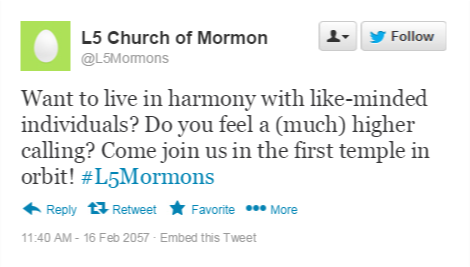 Want to live in harmony with like-minded individuals? Do you feel a (much) higher calling? Come join us in the first temple in orbit! #L5Mormons

In fact, the film Elysium recently reached the conclusion that space colonies can act as enclaves for like-minded individuals, albeit in a wholly negative light.

Human nature being what it is, it is unlikely that space colonies will be as innocuous, high-minded, and fun as depicted in the selection of tweets above. But the purpose of space colonies should not be to create utopias in the sky. While they can expand the resource base of Earth and eventually provide a higher standard of living for all who occupy them, space settlements will not by themselves eliminate war, greed, stupidity, or laziness. Rather, the purpose of space settlement is to expand the stage upon which the human drama plays out.

Space colonies will be little Earths full of love, hate, sadness, and joy. While the food there may be different and the recreation might be better, space settlements, at the end of the day, will be like our homes on Earth: familiar and cozy.

Tom Marotta is a diplomat, city planner and a life-long space enthusiast. His website is marottaspaceresearch.com. All views expressed are his own. Please contact him through his website to request permission to reproduce this article.