High energy neutron particles cause the most dangerous type of space radiation. Representing approximately 30 percent of all radiation the astronauts aboard the ISS receive, it has the ability to damage biological cells and tissues. Created when charged particles collide with physical matter, such as the space station walls or equipment, the neutrons can penetrate organic tissues, harm the DNA, and contribute to development of cataracts, bone marrow damage, or cancer.

The Canadian-Russian detectors will be placed in various modules of the ISS (Credits: CSA).

A new set of instruments called Radi-N2, designed to improve the understanding of astronauts’ exposure to the neutron radiation, was developed by the Canadian Space Agency together with Russia’s RSC Energia and State Research Center of Russia Institute of Biomedical Problems.  These were delivered to the space station along with the Expedition 34/35 crew on December 21.

The Radi-N2 detectors are about 15 centimeter long tubes filled with special gel. The gel contains droplets of liquid that can help quantify neutron radiation inside the ISS. Every time a neutron hits the tube, a droplet is expected to vaporize. As a result, a visible gas bubble is created in the gel. The bubbles are then counted by a computer. By design, the detector ignores all other types of radiation. Altogether, the astronauts will place eight detectors in various modules of the space station. 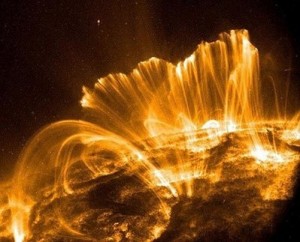 Solar activity is the most common source of dangerous radiation (Credits: NASA).

In 2009, the Canadian Space Agency was in charge of the Radi-N project, a predecessor of the current Radi-N2. The original experiment, carried out on ISS by another Canadian astronaut Robert Thirsk, provided a lot of data which Radi-N2 is expected to advance. In general, bubble radiation detectors are extremely popular among scientists for their simple construction, accuracy, and convenience. For almost twenty years, they have been used during the Space Shuttle missions and on the MIR space station.

The information provided by Radi-N2 will help to assess the potential harm to future human crew if missions to Mars or asteroids are considered. The ISS flies in low Earth orbit where the astronauts are still, to a limited extent, protected by the Earth’s magnetosphere. This advantage will be completely lost once a crew embarks on a long haul space flight. The research into the effects of neutron radiation can also increase medical understanding of the development of diseases related to radiation, such neurological damage, cancer, or degenerative tissue disease.

The video below explains the problem of radiation in space:
[youtube http://www.youtube.com/watch?v=-Se6MaMkdQE]