A cross-agency team led by scientists from NASA’s Marshall Space Center is developing a new tool for measuring the radiation environment in space. An increasing scientific effort has been focused recently on addressing issues connected to human space flight beyond low Earth orbit. With the absence of Earth’s protective  magnetosphere in outer space, space travelers will be subject to radiation doses potentially harmful to their health. NASA’s new contribution in that regard is the Advanced Neutron Spectrometer (ANS). 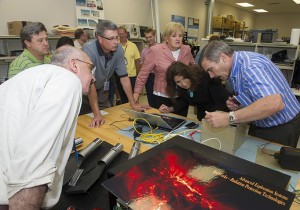 The leader of the NASA Marshall Space Center team Mark Christl during a demonstration of the Advanced Neutron Spectrometer (Credits: NASA).

Mark Christl, the leader of the project at Marshall Space Center, explains: “Measuring neutrons in a space environment will keep astronauts safer because it will give mission managers on Earth invaluable information about the amount of radiation astronauts are being exposed to.” According to Christl, the new tool can be used effectively to detect the levels of radiation inside the spacecraft or space habitat and therefore alert the astronauts when mitigation measures need to be taken.

The detection of neutrons is complicated. The particles are electrically neutral and therefore undetectable by most of the detection systems currently available. The new technique employed by ANS can greatly improve the detectability of neutrons in the mixed radiation fields found in deep space. 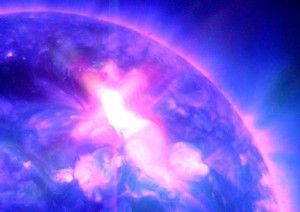 Solar activity is one of the most important sources of dangerous radiation in space (Credits: NASA).

First, a gate and capture technique is utilized, slowing down the neutrons and then capturing them in a Lithium isotope. For this purpose, the ANS uses special glass fibers loaded with Lithium that absorb the slowed neutrons and create a tiny flash of light specific to the neutron capture process. Recognizing the neutron capture signal, custom electronics inside the device then initiate the processing and analysis of radiation levels.

“Our work thus far has been very promising,” said Christl.”By working closely with JSC and other NASA centers, we’ve been able to make great strides on some key radiation protection issues that include the ANS prototype. Our goal is to continue this work to improve the instrument performance and our radiation monitoring capabilities for our astronauts and meet the future needs of exploring new destinations.”

A mixed team from NASA’s Marshall and Johnson Centers have been working on ANS for 11 months. During that period they managed to build a prototype instrument that is now being tested at the Indiana University Cyclotron Facility.