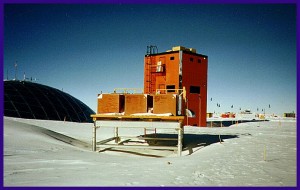 The South Pole Neutron Monitor will use neutron detectors to measure gigaelectron volt neutrons that are produced during a solar storm. A neutron monitor is an instrument that measures the number of high-energy particles impacting Earth from space. According to the designers, the maximum warning time during test runs was 166 minutes.

As we are approaching a solar maximum, the rates of solar flares and CMEs are increasing, thereby jeopardizing the ISS crew, commercial space flights, future plans for manned deep space exploration, and even airplanes at high altitudes near the poles. Exposure to the increased radiation can cause radiation sickness with symptoms such as fever and vomiting, and also disrupt telecommunications. This happens because solar particles are accelerated to very high energies and when they surpass the 100 megaelectron volts threshold, they cause maximum damage.

“Not all space storms are the same. Some of the charged particles spewed by solar flares travel exceptionally fast and thus are extremely energetic, while others travel more slowly,” says John Bieber, a space physicist at the University of Delaware, Newark. “The more energy a particle carries, the more damage it can do. Because the less-energetic slower particles typically far outnumber fast ones, however, they do most of the overall damage. That delay offers the opportunity for an early warning before the most intense part of the solar storm strikes,” he says.

Dr. Oh from Chungnam National University in South Korea is leading the international research team at the Amundsen-Scott South Pole Station. They are using two detectors, indoors and outdoors, to extrapolate the spectrum to estimate the peak intensity and event-averaged flux (fluence) of the megaelectron volt protons. The researchers are optimistic, since their forecasts were found to be similar to the predictions of geosynchronous satellites.

According to Dr. Oh, the system could be useful for forecasting radiation hazard, because peak intensity and fluence are closely related to the medical physics quantities peak dose rate and total dose.

The warning times would be sufficient for astronauts to go to a shielded area of the spacecraft or for airplanes to fly into a lower altitude to be protected by Earth’s magnetic field. More compact versions of these sensors could one day be standard equipment on interplanetary spacecrafts.

Below, you can see a Solar Dymanics Observatory HD video close-up of a massive solar flare:
[youtube http://www.youtube.com/watch?v=4xKRBkBBEP0]