2014 has been a difficult year for aviation; July alone saw three fatal commercial airline crashes. Two Malaysia Airlines jets have been lost in unrelated and highly improbable incidents, resulting in the seventh and nineteenth most fatal crashes in the history of aviation. We contacted ICAO’s Nancy Graham to learn more about safety in aviation and its links with space.

“The first thing I tell people who aren’t familiar with ICAO: we don’t sell furniture,” quips ICAO Air Navigation Bureau Director Nancy Graham referring to the near-homophonous IKEA.” You’d be surprised how many people get that wrong.”

ICAO, the International Civil Aviation Organization, is not a household name but the organization impacts every individual who has ever set foot on a modern aircraft. “We develop all the baseline international rules for everything related to aviation safety, efficiency, security, economic development, and environmental impacts,” is how Graham describes it. And it all started with the Convention on International Civil Aviation, or the Chicago Convention,as it’s more commonly known.

The Chicago Convention was drafted and signed by 52 states in Chicago, Illinois on December 7, 1944. ICAO was put in place as a specialized UN agency to coordinate the Convention’s ongoing review and refinement. Today there are 191 signatories, also referred to as ICAO Member States, to this global agreement.

ICAO maintains the 19 Annexes to the Convention, publications which today contain over 10,000 international Standards and Recommended Practices covering everything from licensing rules and mapping to security and accident investigation. States reference these standards to ensure that their national regulations conform to ICAO’s baseline global requirements. This permits aircraft to operate in a harmonized procedural environment, wherever they fly.

ICAO also leverages its position at the heart of the global aviation system to broker industrial and intergovernmental partnerships, “drawing them together to reach agreements on things that are emerging in the future,” Graham says. “We always try to be both cooperative and proactive in aviation, that’s why we still remain the safest form of transportation.”

The Tragedy of MH17

Unlike the Malaysia Airlines flight that has gripped the world’s attention since March, the second Malaysian plane to suffer a tragedy this year was shot out of the air on July 17.

“ICAO strongly condemned the use of weapons in the loss of Malaysia Airlines Flight MH17,” Graham says. “This tragic and unlawful action against 298 civilian passengers and crew was wholly incompatible with the Convention and its clearly outlined intention to create and preserve friendship and understanding among the nations and peoples of the world.”

The investigation into this incident is just beginning, but so far there is no reason to suspect any technical or procedural failures were involved and nothing to link it to MH370, the flight that mysteriously disappeared on March 8.

“This was completely unexpected and unprecedented in aviation history,” says Graham of the disappearance of Malaysia Airlines Flight 370 on March 8, 2014. “I think it rattled the faith of any who fly, and I think that’s fair.” 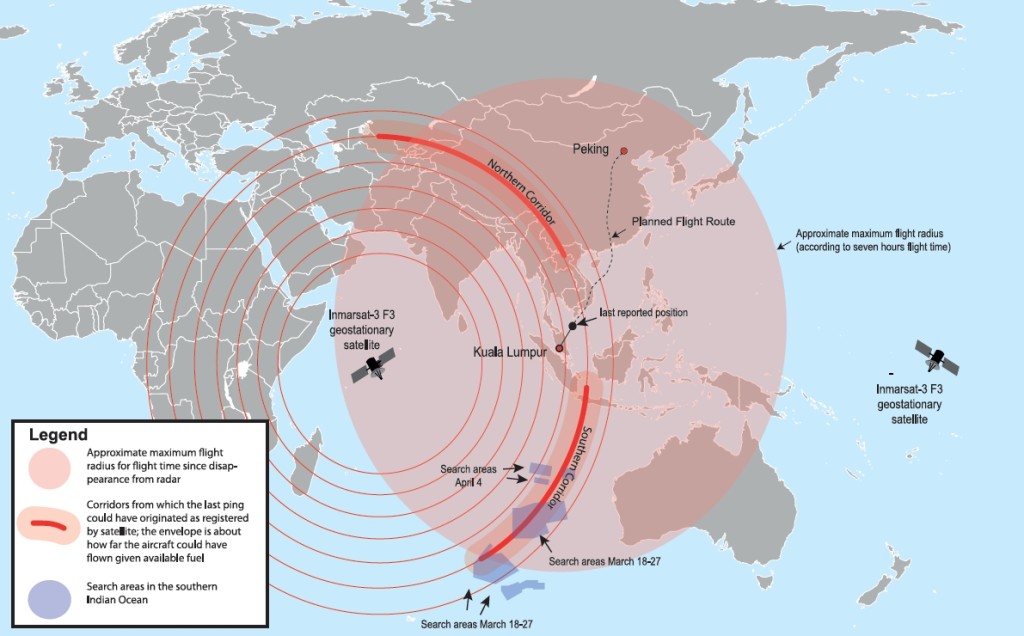 The evolution of the MH370 search area (Credits: Furfur and Pechristener/Wikipedia with translation by A. Klawitter).

The MH370 situation has not directly led to new ICAO rules or processes because no one yet knows what went wrong. But the difficulty in finding the plane has itself underscored the need for better tracking capability over the oceans where planes are beyond the range of terrestrial radar. “It pointed out what had always been a hole in the infrastructure, but it has been managed and mitigated through robust procedures, which work for thousands of flights every day of every year.  These procedures are transparent to the passenger, but critically important.  It is clear that something happened in this instance where those procedures didn’t work.”

To address this infrastructure challenge, many aircraft carry equipment capable of satellite based telecommunication, however, they may not have registered for a data plan, to use a mobile phone analogy. That has implications for both air traffic management and global tracking of aircraft. ICAO is already working towards planned improvements to global tracking that were underway well before MH370 took flight.

The first thing to understand about global tracking is that it is entirely separate from air traffic control.

“The purpose of global tracking is to be able to more quickly locate the site of an accident or precisely locate a missing aircraft,” says Graham. “So it’s not about preventing the accident, it’s really about locating the craft when something anomalous has happened.”

Air traffic control, on the other hand, is the process for communicating with and management of in-flight aircraft. Graham notes that the technology may even be the same for these two functions.  “Today, most modern day aircraft, wide-body aircraft, have the capability of that connection to a satellite network and we want them to use it, in addition to air traffic control, to track their own aircraft. That’s what we’re saying. Use it today.”

What’s the barrier to doing that? “I don’t think there is a barrier today, actually. Up to this point it was assumed that the air traffic control system was adequate enough.” Whatever remained of that assumption following the anomaly of Malaysia Airlines Flight 370 was further challenged by the brief disappearance of Air Algérie flight AH5017 on July 24, over land in bad weather.

While the assumption that the current system is sufficient has been dispelled, it may not be so easy for operators with a range of aircraft models to set up that missing satellite connection. Graham notes that “in some cases the airlines will have to move their more modern fleets over the ocean” while keeping older planes for domestic, land-only flights. But, says Graham, “there is a commitment, complete solidarity within the aviation industry that we are going to do this.”

“For many, many years we have been providing procedural control, a procedural mechanism to address this. Now we have the technology and we can add another layer of safety to this operational area.”

Improved tracking can help find a lost plane like MH370 after it has crashed. But what about better traceability for aircraft in flight?

“In the longer term we will be expecting to see all aircraft and all air traffic control systems be satellite based,” says Graham. Some countries are transitioning to satellite-based ADS-B already, but it will not be universal for another five to eight years.

None of these measures would have prevented the loss of MH370, whose flight crew broke procedure, or MH17, which was targeted by missiles in clear violation of international law. There are some things that technology can’t fix.

ICAO’s jurisdiction ends well below where Space begins, but it’s hard to ignore the convergence of policy needs in the two arenas.  “It became clear to me about a year ago that ICAO needed to learn more about what commercial space needed as a community from ICAO,” says Graham. “You’ve got to get those spacecraft safely through the routine airspace system out to Outer Space and then back in.  That has been happening for some years, but on a fairly non-routine basis.  In the future it will be much more routine and much more often, so we need standards and rules to allow for this growing industry.”

ICAO established a learning group with the International Association for the Advancement of Space Safety (IAASS) and is looking to collaborate with the UN Organization for Outer Space Affairs (UNOOSA). “What I think is important is that we learn from each other,” says Graham. “We are safety professionals and collaboration and openness have always been the hallmarks of safety success. Both principles will be important as the aircraft and spacecraft communities explore what’s ahead.” 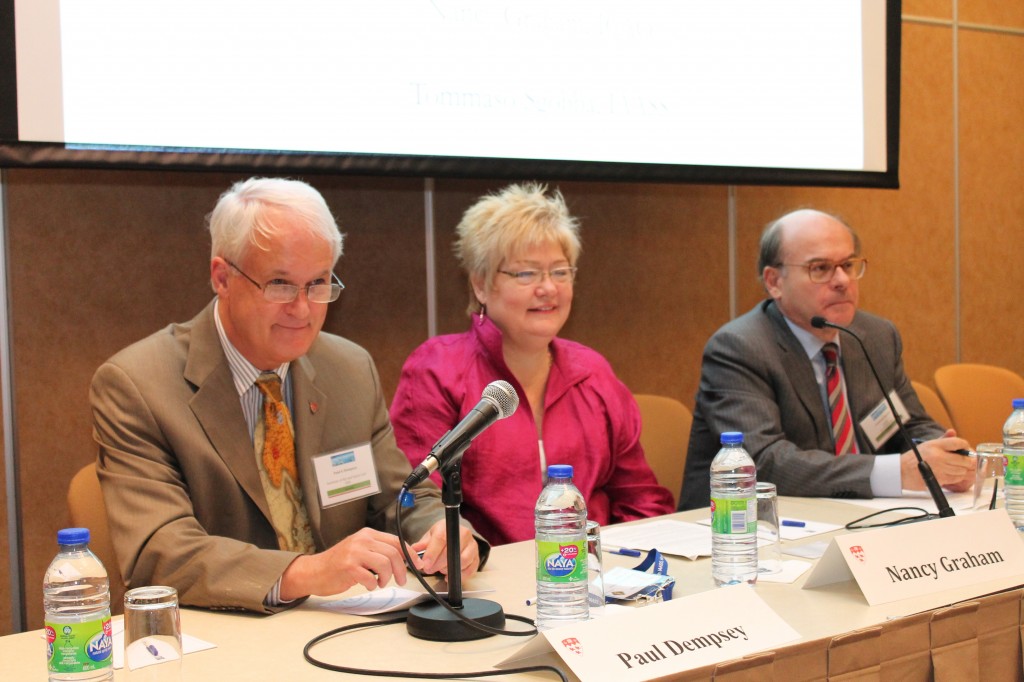 Graham concluded by stressing that ICAO has a 70 year history of forging global consensus on airspace cooperation. Commercial space may well be the logical next step for the UN aviation body.

“I’ve been very inspired seeing the Earth from space and appreciating our planet without any sense of division or borders. One of aviation’s greatest attributes is its ability to bring peoples and nations together, making our globe a little smaller, you might say. Commercial space will likely be the next leg in that journey.”