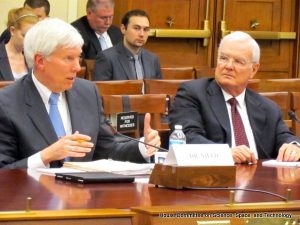 Dr Nield and Captain Trafton of the FAA testify at the House Subcommittee hearing (Credits: US House of Representatives)

On March 20, the US House of Representatives Subcommittee on Space and Aeronautics met to discuss the fiscal year (FY 2013) budget request and roles and responsibilities of the Federal Aviation Administration (FAA) Office of Commercial Space Transportation (AST). AST is requesting an increase in 2.6% or $16.7 million for FY2013. Testifying on behalf of the FAA was Dr. George Nield, Associate Administrator for AST, and Captain Wilbur C. Trafton, Chairman of the AST Advisory Committee.

In the past AST has primarily been involved with un-manned, expendable launch vehicles. The increase in budget request expresses AST’s need to learn and understand the differences human commercial flights will bring. Seeing how NASA already has human safety knowledge and is already supporting commercial space flight companies, many representatives worry about cross agency cooperation and duplication of research.

“I realize that AST has a significant amount of work ahead as it endeavors to align its regulatory approach with evolving industry approaches to safety,” said Subcommittee Chairman Steven Palazzo (MS, R). “We will be closely monitoring the collaboration between FAA and NASA in this area to ensure these agencies avoid conflicting or duplicative responsibilities while balancing authority for commercial space operations on NASA missions.”

To address this concern Trafton explained how NASA and FAA/AST have been working together for many years.

“NASA is not a regulatory agency, nor does it want to be a regulatory agancey. FAA/AST’s charter assigns this role to FAA/AST, and they have effectively and safely executed this mandate for 28 years,” said Trafton. “Collaborative discussions between NASA and FAA/AST, specifically on commercial crew, have been taking place for over a year, and include activities such as rotational assignments between the two agencies and support of definitions for crew and participant safety and for safety certification requirements development.”