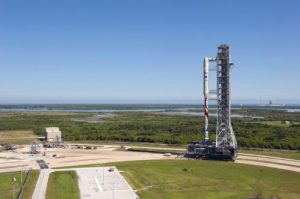 ATK and NASA announced on September 13 an unfunded Space Act Agreement (SSA) which enables NASA to share technical information with ATK’s Liberty program office during the Preliminary Design Review phase of the program. “This SAA enables us to exchange information with NASA and receive valuable insight as we develop our fixed-price commercial crew vehicle and prepare it for test flight as early as 2014,” said Kent Rominger, ATK vice president and program manager for Liberty. “This helps us to ensure that we provide the safest, most reliable, cost-effective and capable launch vehicle for crew transport.” The Liberty rocket combines a 5 segment shuttle derived solid rocket motor, provided by ATK, with an Arian 5 derived second stage designed by EADS Astrium. According to ATK, the rocket has the capability to lift about 20 metric tons to low Earth orbit. The rocket will be human rated, even though no official space capsule has been announced yet to be flown on top of it. According to ATK, the launch vehicle will also be designed to fly winged spacecraft. The official schedule calls for an unmanned test launch in 2014, followed by a crewed flight in 2015. You can read a Chris Bergin article on  NASA Spaceflight.com on the development of the project.