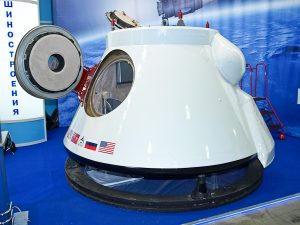 Excalibur Almaz, a company based in the Isle of Man, has been awarded an unfunded Space Act Agreement for a Commercial Crew Development (CCDev)-2 proposal on October 7, 2011. “We’re providing limited technical support consistent with the purpose of the CCDev-2 activity, which is to advance orbital commercial transportation concepts enabling significant progress on maturing the design and development of the system,” said NASA spokesman Michael Braukus in this regards. The precise details of the proposal have not been disclosed yet.

Excalibur Almaz is resuming decommissioned Soviet-era technology – namely the Almaz military space station program – acquired from Russia. The TKS spacecraft that the company is planning to use has been extensively  flight-tested between 1973 and 1983, but never with a crew onboard. According toPhil McAlister, director of commercial spaceflight development at NASA headquarters, Excalibur Almaz, “have a credible concept.”

In the video, below, a promotional video of the company.