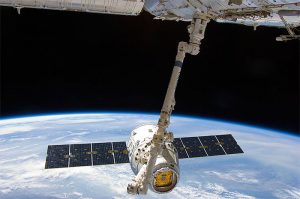 The success of SpaceX’s Dragon spacecraft shows the power and the potential of the COTS and CCDev programs (Credits: NASA).

Last June, Congress forced a “compromise” on NASA, which was more like a surrender. Under this “compromise,” NASA was forced to reduce the number of companies in the CCDev competition from five to three. The third company (Sierra Nevada) received a much smaller amount of funding than the primary competitors (SpaceX and Boeing), so the current field is often referred to as “two-and-a-half competitors.”

Now, it appears the field is about to shrink further. At a hearing on March 20, NASA Administrator Maj. Gen. Charles Bolden told Congress, “We intend to put a request for proposal on the street this summer and you will probably get a downselect.” The losers will be kept hanging for a while, however. “You won’t see the selection announced until the middle of next year, 2014,” Bolden said.

The downselect is being driven by Congressional budgets. Congress has not allocated anything close to the full amount requested by the Administration for CCDev, preferring to pour money into the Orion capsule and Space Launch System instead. In Fiscal Year 2013, CCDev is receiving $489 million, compared to the $830 million request.

To make matters worse, some of the money NASA has received is being diverted into the Certification Products Contract, instead of into vehicle development. NASA is creating a certification regime that will impose strict human-rating requirements on “commercial,” vehicles, similar to those imposed on government vehicles. The Certification Products Contract is part of that regime. NASA has also indicated it intends to switch from Space Act Agreements, under which CCDev began, to the more stringent Federal Acquisition Regulations (a move also favored by Congress, which included it in last June’s “compromise”).

The train wreck is now here. With the switch to FARs, CCDev is now commercial in name only. It is no longer Commercial Crew and Cargo Development but Contractor Crew and Cargo Development. This development should come as no surprise. The late G. Harry Stine repeatedly warned about the incompatibility of government and commercial requirements (famously quoting Robert Heinlein’s statement that an elephant is a mouse built to government specifications).

“New space” groups like the Space Frontier Foundation paid no attention to Stine, however (nor Hale, either). The SFF not only accepted but actively welcomed last year’s “compromise.” SFF co-founder Jim Muncy told Space News, “Wolf deserves credit for forcing NASA to come to the table and straighten their act out.”

CCDev (and its predecessor, the COTS program) played a useful role in stimulating the development of commercial access to space (particularly for Elon Musk’s SpaceX) but that usefulness seems to be rapidly coming to an end. It’s time to look beyond CCDev and the International Space Station, toward truly commercial markets. The “new space” policy of putting all its commercial space eggs in one ISS basket is a potential disaster in the making. (This, too, is something Stine warned about.)

Instead of fixating on COTS and CCev for the last decade, space activists could have championed a broad portfolio of policy measures that would help commercial space: tax incentives, data purchases, prizes, regulatory and liability reform, and space property rights, for example. Most of these measures would have cost the government little or nothing. They would have helped a wide variety of commercial space ventures, not just a handful of companies developing space capsules for ISS. They would also be less vulnerable to sudden changes in government spending patterns, such as sequestration. Unfortunately, these options were repeatedly rejected by new space leaders, who recited the mantra that “COTS is more important.” (At the same time, “new space” leaders devoted a huge amount of time and effort to lobbying for the costly and ill-fated Bush Vision of Space Exploration, which has done little to further space exploration.)

Fortunately, it’s not too late for the space movement to change course. It’s time to set aside the monotonic policies of “new space,” which sound more and more like Johnny One-Note on the kazoo, and take a fresh look at the ideas of old-timers like G. Harry Stine, which look smarter and smarter all the time.

This article was republished from Moonandback with permission of the author and publisher. Opinions expressed are those of the author and do not necessarily reflect the position of Space Safety Magazine or its sponsors.