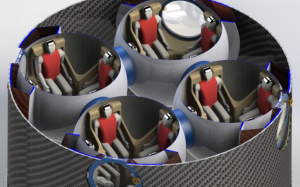 The placement of the pods on a floor of the SHIPinSPACE vehicle (Credits: SHIPinSPACE).

SHIPinSPACE LTD, a small new company that is developing a revolutionary idea for a suborbital plane, has started an Indiegogo campaign to help them advance the concept study. The suborbital vehicle proposed by SHIPinSPACE would be able to bring 48 passengers to the limit of space. Safety is the key factor in the innovative design of the vehicle.

“SHIPinSPACE will be the only company worldwide to permit this feature thanks to our decoupling structures technology,” said SHIPinSPACE CEO Fabrizio Boer in an email to Space Safety Magazine.

SHIPinSPACE’s team has designed what they claim

to be a new ultra-safe passenger module. The design would dramatically increase the number of passengers carried on a single suborbital flight and at the same time decrease the tickets’ cost. The large capacity design is allowed by spherical pods, each accommodating 4 passengers, and an assembly configuration allowing the placement in the fairing of four pods on three floors, for a total of 48 passengers. The fairing, built in carbon fiber sandwich, has an overall diameter of 5.5m and keeps the pods well packaged in a state of pre-compression. SHIPinSPACE aims to reduce the development cost of the vehicle with a decoupled pre-compressed structure using shock absorber materials to greatly decrease the vibration of the system. According to SHIPinSPACE, with this technology the vehicle could even use equipment not qualified for space, reducing the overall costs. 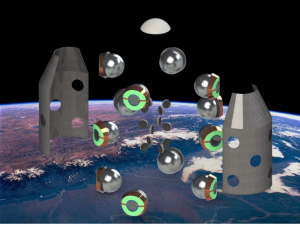 In case of emergency, the fairing will be pyrotechnically cut and the pods could be separated to permit a safe descent with parachutes. This escape capability is the revolutionary feature of the concept allowing the vehicle to carry such a relatively high number of people. The vehicle is powered by a liquid rocket engine, fueled with Liquid oxygen and RP1, which is basically kerosene for rockets.

SHIPinSPACE has locations in Turin, Italy and London. The design team is formed by three aerospace engineers with previous experience on Ariane 4, Columbus module, ATR42, and Airbus 320, among others. The Indiegogo campaign aims to collect at least $100,000 to improve the core technical concept, set up the company and start attending conferences to present the project while looking for partners and investors.

According to SHIPinSPACE, the ticket price would be “only” $50,000, which is almost one quarter of Virgin Galactic’s fee and half the cost of tickets offered by Space Exploration Corporation.