It was announced yesterday (Nov. 15) that NASA and SpaceX engineers and safety specialists met in late October to discuss the safety of the Dragon spacecraft as well as the Falcon 9 launch vehicle which will deliver Dragon and crew to orbit. The capsule and rocket are expected to make crewed missions to low Earth orbit during this decade as part of NASA’s Commercial Crew Program (CCP). This meeting proved to be a major milestone for both the company – and the program.

Representatives from both NASA and SpaceX underscored the importance of maintaining a collaborative spirit and open lines of communications regarding safety, which is always an important issue, especially when it comes to manned crews. Jon Cowart, deputy manager of the NASA Partnership Integration Team for CCP, echoed this feeling.

“The milestone is not the end of the safety discussion, it’s really the beginning. Because we’ve been doing this for so long, we all have a pretty good idea of what works and what doesn’t and how safety processes can be strengthened to increase our confidence in the system,” related Cowart.

Garrett Reisman, commercial crew project manager at SpaceX and a former NASA astronaut, also emphasized how cooperation is of the utmost importance.

“We greatly appreciate NASA’s support and feedback throughout this process. Together we are taking all the necessary steps to make Dragon the safest, most reliable spacecraft ever flown,” said Reisman. 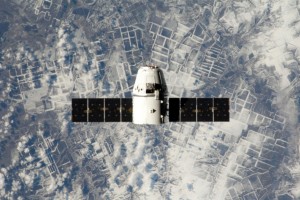 SpaceX is currently making preparations to make both its capsule and launch vehicle ready for crewed flight through NASA’s Commercial Crew Integrated Capability (CCiCap) initiative. The Dragon spacecraft has already made several successful cargo missions to the International Space Station (ISS), powered by the small but mighty Falcon 9 rocket.

Part of SpaceX’s upcoming safety tests will include two flight tests scheduled for 2014, which will test the Dragon spacecraft system’s abort feature. This feature is meant to take a crewed spacecraft out of harm’s way in the event of an emergency (of course, this test will be uncrewed and the emergency will be simulated). The first test will simulate a pad abort, while the second one will allow the Dragon capsule to separate in flight and parachute to safety in the Atlantic Ocean. SpaceX is currently building the spacecraft for these tests, and will soon begin to manufacture the rockets that will be used.

This milestone is the ninth for SpaceX under the CCiCap initiative. The company is well on its way to completing all 15 of its milestones concerning this program in 2014. If successful, we can hope to see the Dragon capsules, launched by Falcon 9 rockets, deliver crews safely to the ISS within four years.

In related news, on Wednesday, November 13, NASA Administrator Charles Bolden, flanked by SpaceX’s Gwynne Shotwell and Orbital’s Frank Culbertson, announced the completion of the COTS (Commercial Orbital Transportation Services) program, giving the all-clear to the companies to provide regular services to the ISS.