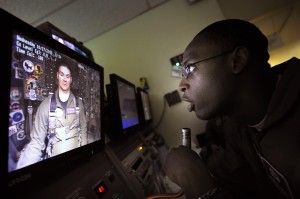 Howard realized during her training at NASTAR that there were no courses helping people to deal with stress and fear relating to space experience (Credits: USAF/Veronica Stamps).

Everyone is familiar with astronaut training procedures from practicing EVAs under water to studying diagrams of the spacecraft they will fly and spinning around in centrifuges to experience the rigors of g-forces. But all this physical, physiological, and intellectual preparation doesn’t address the psychological and emotional responses of future spacefarers. What of an astronaut’s fear, for instance, when faced with an unexpected challenge in an unfamiliar environment?

That’s the question that Astronauts4Hire flight member Dr. Mindy Howard started asking when she realized that soon a lot of people would get access to space without sufficient preparation. Howard attended a National AeroSpace Training and Research (NASTAR) Center for Suborbital Scientist Training Program, which provides specific training for prospective “Suborbital Scientist-Astronauts” wishing to fly experiments on upcoming suborbital space missions. While there, she had an epiphany.

“When we were in the centrifuge there was a camera on people’s faces and you can see people’s eyes become wide when they were scared,” says Howard. She noticed that there were a lot of differences in terms of how people were performing and psychologically reacting to centrifuge, altitude, and different g- forces. “I was really surprised,” says Howard, “when I asked people if there were any courses or training out there to help people psychologically” to not be fearful and was told there were none. Howard realized there was a need for dedicated space training to teach people how to deal with stressful situations and fear relating to the space experience.

Most of the future commercial astronauts, both suborbital scientists and space tourists, will likely have only one chance to achieve the “once in a lifetime experience” that is a suborbital flight. Howard decided to make sure that such spacefarers would have access to appropriate advance training to acclimate psychologically before the flight, and so she founded Inner Space Training (IST). IST addresses the mental and emotional challenges that may be experienced during flight, alleviating such challenges by ensuring that participants understand each phase of flight and know what to expect and what comes next. This understanding, commonly called situational awareness, provides the conditions for a peak experience.

Although IST was originally designed for commercial astronauts, the majority of the training is related in how to deal with stressful and fearful situations, so it can also be useful for people that are not necessarily going to space. There are space-specific elements but there are also parts that are all about preparing for and recovering from a life-changing event.

Registration for the next IST session, to be held in May in the Netherlands, ends on April 23. For more information on Inner Space Training, particularly details of its unique MindSpa experience, stay tuned for the upcoming article in the Spring 2013 issue of Space Safety Magazine. The Magazine will be available online in April.