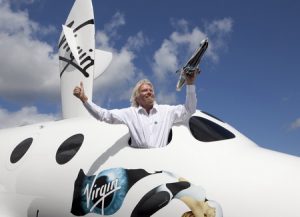 Richard Branson shows off a model of LauncherOne during his announcement (Credits: Mark Chivers).

The rocket will be air launched by Virgin Galactic‘s carrier aircraft WhiteKnightTwo.  According to the company‘s website, costs are expected to be below $10 million in order to be accessible to smaller companies and researchers.

“Now, LauncherOne is bringing the price of satellite launch into the realm of affordability for innovators everywhere, from start-ups and schools to established companies and national space agencies,“  said Richard Branson at the LaucherOne annoucement, “It will be a critical new tool for the global research community, enabling us all to learn about our home planet more quickly and affordably.”

LauncherOne has already attracted customers such as the Earth observation company Geoptics, Spaceflight Ltd., Skybox Imaging, and the astroid mining company Planetary Resources , all of whom were present at the annoucement.

Richard Branson also unveiled the company‘s schedule for suborbital flights on SpaceShipTwo. In addition to LauncherOne, the company is testing the spacecraft SpaceShipTwo  to bring people to the edge of space by December 2013 on suborbital flights.  Already 529 people have signed up for flights, at the price of $200,000 a seat.  Currently, SpaceShipTwo is being tested in the Mojave Desert  of California;  it is expected that Virgin Galactic will begin commercial flights of LauncherOne by 2016.