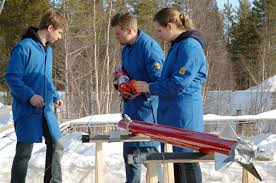 DARE students place the capsule atop the STRATOS I rocket (Credits: DARE/SSE/Esrange).

One may think that launching rockets could be a dangerous occupation for students. However, this is not true for the DARE Team, one of the boldest and most successful teams of the Technical University of Delft (TU Delft), in the Netherlands.

DARE, standing for Delft Aerospace Rocket Engineering, was born in 2001.  “It came from a need to apply the theoretical knowledge that you gain in aerospace engineering during lectures in practice,” said Peter van Gemert, DARE Range Safety Officer.  “It was an initiative of six students,“ added Olga Mostyk, DARE pyrotechnics safety officer. “They wanted to launch a rocket but they didn’t know much about practical rocketry and the first trial didn’t go well, but since it was a small rocket, it didn’t do much damage.”

They realized that if they really wanted to get into rocketry, they needed much more knowledge about safety. At the beginning, there was just one person designated for the safety tasks, because of his previous experience at NAVRO, the Dutch amateur association for rocket research. The DARE team has grown a lot from those days and now it can count over 100 members, with an established safety board. The safety board’s members have training and knowledge in workshop, tests, range, and pyrotechnics safety. In particular, pyrotechnics safety officers are the only people that can handle and produce the propellants, while operational safety officers oversee that tests are conducted according to safety standards, and range safety officers make sure that during the launch anyone who is in the area is safe. The safety knowledge is internal, derived by lessons learned from previous launches and from other rocketry groups; the procedures are learned by practice.

Safety officers’ general tasks include bringing new knowledge inside the team through extensive literature study to keep their practice’s list always up-to-date. Moreover, the officers have to think in advance about possible accidents that can happen in each phase, from the manufacturing to the launch and retrieval of the rocket.

Mostyk said that, as pyrotechnics safety officer, she is in charge of handling chemicals such as ammonium nitrite and potassium nitrate, used as solid oxidizers, and also solid fuel, black powder, and various liquid and pressurizing gases. DARE normally looks at the general practice used in the space industry together with first-hand experience. “When we do start working with new materials, we perform tests with small quantities and mix together to see how they perform, ignite; gradually, when it’s safe, we go up with bigger quantities,” said Mostyk. Van Gemert explained that operational and range safety officers are responsible to minimize the risk for those on the ground, checking rockets’ weight and stability before the launch as well as expected flight path according to the weather condition on the liftoff day, remaining in contact with air traffic management.

The DARE team has held the European altitude record for amateur rockets since 2009, when Stratos I rocket was launched from the Esrange Space Center, near Kiruna in northern Sweden. The 2-stage rocket, propelled by solid engines, reached an altitude of 12.3 km.  DARE is now planning to beat its own record with Stratos II, a new rocket to be launched at the beginning of 2014, propelled by a hybrid engine developed by students. The goal for this launch has been set to 50 km altitude. A part of the Stratos project relates to research on solid, hybrid, and liquid propulsion. DARE has also other side projects, like the CanSat Launcher, which has provided the carrier for the Dutch CanSat competition since 2007.

Below, DARE launch campaign for the first African CanSat competition, during the 2011 International Astronautical Congress, in Capetown.