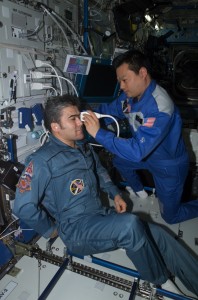 This spring NASA will start an investigation into a range of vision issues that are suffered by some humans during long-duration space flights. Approximately 20 percent of astronauts serving aboard the International Space Station have reported blurry vision during their expedition length mission. During the post-mission physical rehabilitation back on Earth, the vision problems typically disappear.

“This was a process that was not predicted by what we know about human health on Earth,” said NASA ISS program scientist Julie Robinson. “We will be taking systematic measurements to really try and understand this process for the first time.”

The Ocular Health Study, aims to gather data in order to characterize the effects of prolonged spaceflight upon human health.  This includes the blurry vision of crewmembers assigned to 6 month stays in space. The in-flight investigation measures include tonometry to take regular measurements of intraocular pressures of crewmembers, and ultrasound scans of the intracranial physiology and the eyes. The study will last two years and will specifically address the symptoms of blurred vision, looking for any explanation regarding the causes of this condition. The results and the understanding of the cause is particularly important for human deep-space missions, outside Earth’s orbit, that NASA is currently planning. Additionally, the findings may also be beneficial to the development of new treatments for ocular health problems for humans on Earth.

“This is very important data we will be collecting not only for our own health, but also as it translates to the whole planet for ocular health,” said NASA astronaut Chris Cassady, who is going to be launched to the ISS with two Russian cosmonauts this March. Cassady will one of the astronauts carrying out the investigation and will serve as a subject. “We will be prepared to iterate the process until we deliver the right data.”

In 2012, the National Space Biomedical Research Institute (NSBRI) launched eight new ground-based investigations into this vision issue. Additional research to expand our understanding of how microgravity affects astronaut vision is planned to continue in the future.