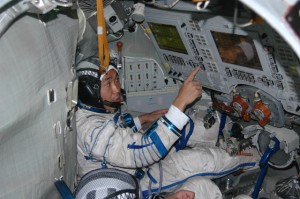 “We’d like to keep the drug effective for about 2-year stays in space,” says Tokushima University professor and study leader Toshio Matsumoto. For the moment, ISS crew continue exercise routines to keep bone loss at bay. But that may soon change based on results of this study.

Osteoporosis is a disease of the bones which leads to a high risk of fracture and other problems, mainly due to the reduction of the bone mineral density. Lack of gravity causes bones to lose more Calcium and therefore astronauts operating and living in micro-gravity are more prone to have bone fractures and develop renal stones from the released Calcium. The research on ISS crew began in 2009, with the weekly oral  administration of 70 mg of alendronate (Fosamax), a counter biphosphonate, to five astronauts. The subjects, including astronauts Koichi Wakata and Soichi Noguchi, started by taking three doses before going to the ISS. Some astronauts also received a single 4 mg intravenous zolendronic acid dose 45 days before the flight. The astronauts’ bone mass was then monitored and the results were finally compared with those of 14 astronauts who had not taken Fosamax. 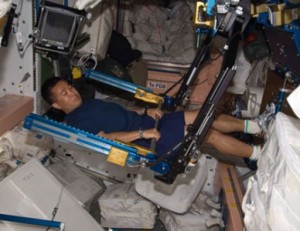 Flight Engineer Koichi Wakata starts to work out on the Advanced Resistive Exercise Device (ARED) in the Unity node aboard the ISS (Credits: NASA).

The results showed a significant difference between the two groups of astronauts. The average bone density loss for the astronauts who did not take Fosamax was 7% in the femur and 5% in the hip bone. In contrast, the five astronauts on the counter biphosphonate, had an average loss of 1% in the femur and, surprisingly, a 3% increase in the hip bone, with  very low Calcium level in their urine. However, it was noted that the drug’s effectiveness was reduced the longer it was taken.

The video below discusses the importance of studying space related bone loss to the efforts to prevent osteoporosis on Earth.