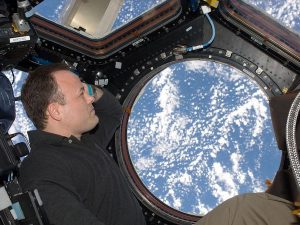 New concerns have arisen regarding the health of astronauts on long duration missions beyond the well-known phenomena of bone loss and muscle atrophy.  A NASA- sponsored study conducted by prominent American ophthalmologists suggests that changes in the optical system endure long after the return to Earth from space flights longer than six months. Results were published in the October issue of Ophthalmology.

The researchers studied seven astronauts over 50 years of age, who have spent a minimum of six consecutive months in space. All of them reported blurred vision during their residence in space. Visual conditions usually appear after more than six weeks in the space environment, indicating that microgravity,  rather than launch or re-entry phenomena, is to blame according to the researchers.

As part of research, astronauts undergo regular checks of their eyes and vision pre and post flight as well as aboard the space station (Credits: NASA).

Detailed examination revealed several abnormalities in long-duration astronauts, such as flattening of the back of the eye, folds in choroid (light sensitive vascular tissue behind the retina) and excess fluid around, and presumed swelling of, the optic nerve.

Similar abnormalities on Earth could be caused by intracranial pressure, however, the examined subjects hadn’t reported any symptoms usually associated with this condition. Researchers believe that observed changes may be associated with the shift of fluids towards the head that occurs in the microgravity environment.
The goal now is to determine whether some astronauts are less prone to suffer enduring effects of microgravity than others. If so, the more resistant ones would be better-suited for extended space flight, such as a possible mission to Mars.

Vision related problems during and after space flight have been recognized for some time. For example, according to a recent NASA study, correctable near and distance vision disorders are reported by 99 out of 300 astronauts on brief missions and by almost 150 out of 300 on extended missions. To avoid near-vision problems, space glasses were introduced in the early years of space flight. Researchers believe that the shift towards slightly older astronauts as compared to the pioneering years of space exploration might play a role.

“In astronauts over age 40, like non-astronauts of the same age, the eye’s lens may have lost some of its ability to change focus,” said one of the researchers Dr. Thomas H. Mader, “In the space program’s early days most astronauts were younger, military test-pilots who had excellent vision. Today’s astronauts tend to be in their 40s or older. This may be one reason we’ve seen an uptick in vision problems.”

The research is ongoing and elaborate eye examinations and vision testing are now a part of astronauts’ regular pre- and post-flight routines. This includes magnetic resonance imaging, optical coherence tomography, recording images of the retina, and ultrasound imaging during the flight.

The video below discusses the effects of microgravity on human physiology.