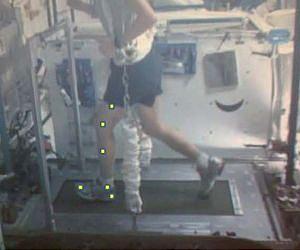 Image taken from video captures a crew member’s Treadmill Kinematics session showing marker locations and the attachment point of the bungee system to the surface. (Credits:NASA).

Crew losses of bone and muscle in the microgravity environment during space flight is known to be one of the biggest challenges for long duration flights. Not even the current standard of two hours of exercise per day is enough to completely prevent changes in astronauts’ condition. A new space station experiment based on biomechanical analysis of treadmill exercise should find out how to design the most useful training program to maintain or improve crew health during long missions.

Comparison of treadmill exercise in space and on Earth is an important part of the study. As the principal investigator for the experiment John De Witt, of theWyle Integrated Science and Engineering Group in Houston, said, “Exercise activities are developed under the assumption that walking and running in microgravity have the same training effects as under normal gravity. However, if there is a difference, we will learn more about the effects, allowing us to develop appropriate exercise prescriptions to increase benefits to crew health and well-being.” 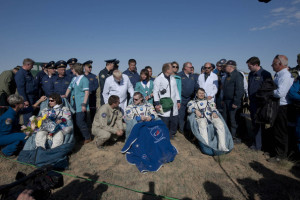 Astronauts after landing in a Russian Soyuz capsule assisted by a medical team. No such support will be available after landing on Mars. (Credits: ESA).

Researchers are currently gathering video material of ISS crew members running and walking on a treadmill under various loads and at varying speeds. The analysis should provide data on the force the body exerts when the foot hits the ground. Scientists will also compare in-flight running styles with running styles in terrestrial conditions.

“On the space station, locomotion – running and walking movement – occurs on a treadmill that isolates vibrations, which increases the potential for training differences in space,” said De Witt. “The overall goal of the advanced exercise regimes for the crew members is to increase weight at the joints to provide a greater stimulus for bone and muscle health.”

The results of a previous study performed on an older version of the treadmill proved that the current exercise regime isn’t enough to prevent bone and muscle loss. With a better treadmill now in use and improved protocols in development, researchers believe that they will be able to solve one of the biggest challenges for possible future long duration missions. Till now, the question of whether astronauts will be able to perform after landing in gravity again after a several months long mission, such as to Mars, has been central to consideration of such a mission.

The results of the study will also help to improve understanding of how exercise speed and external loads affect forces experienced by the joints and muscles on Earth.

The video below, courtesy of NASA, shows ISS crew demonstrating exercise in space.