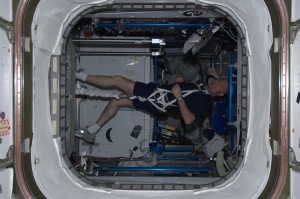 A study of six International Space Station (ISS) crew members has shown that the impact of spaceflight on spacefarers’ cardiovascular systems are apparently limited by their exerise routines. The study results were published in the March edition of the Journal of Applied Physiology.

“These post-flight changes were somewhat less than expected based on short-duration flights and early reports of long-duration missions and suggest that the current countermeasures on the ISS, which include exercise training, are keeping cardiovascular control mechanisms well prepared for return to Earth,” the study’s authors say.

The space environment is known to have detrimental effects on human physiology, causing loss of bone density, muscle mass, and changes to the optical system among other effects. Typically, the longer the flight duration, the more severe the effects. Experiments continue into potential preventative steps, but the major countermeasure currently used is regular exercise. Astronauts and cosmonauts aboard the ISS spend approximately two hours each day working out, running on the treadmill, performing resistance training, or cycling.

Cardiovascular effects are somewhat unique in that most changes occur early in the spaceflight experience. The major long term cadiovascular change involves the baroreceptor reflex, or the ability of the heart to compensate rapidly to changes in blood pressure. On Earth, this reflex is activated  when a person rapidly rises from a prone position, for instance. Due to the lack of gravity in space, the reflex is less used and becomes slower to respond to changes after a person returns to Earth.

Changes to the baroreceptor reflex was the primary focus of the Journal of Applied Physiology study. Six male astroanuts aged 41-55 years were studied before, during, and after ISS flights ranging from 2 to 6 months.  The researchers found that baroreceptor reflex decreased 25-34% and resting heart rate increased slightly for these astronauts. These effects were less than expected and represent only modest cardiovascular deconditioning.