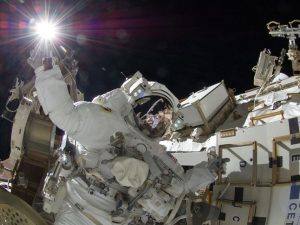 In addition to their usual daily science and maintenance tasks, Expedition 33 Commander Sunita Williams of NASA and Flight Engineer Akihiko Hoshide of Japan living aboard the Earth’s orbiting laboratory International Space Station (ISS) are currently preparing hard for a Nov. 1 spacewalk. The spacewalk is needed to repair an ammonia leak on electrical power channel 2B, which is located on the station’s port-side radiators outside the station. Ammonia is circulated as a coolant through the thermal control systems to eject waste heat from the station.

The ammonia leak is not a new occurrence, it has actually be tracked for years. A recent increase in the leakage rate led ISS flight controllers to project that electrical power channel 2B could go offline by the end of 2012 due to lack of sufficient ammonia for cooling. Channel 2B accommodates a large number of components for the ISS and if it were to go down, severe overheating could result across the entire station. A more minor leak might require simply refilling the ammonia, but the high leakage rate renders that option less efficient than rectifying the fault.

Astronauts do not just “go outside” of the station. The days leading up to the Nov. 1 EVA are intense days for the spacewalking duo with preparations including tool gathering, equipment gathering, studying new procedures, reviewing and talking through how to get suited. The suits are essentially little space craft that have all the valves, tanks, cooling, heating, that astronauts have on ISS to keep them alive.

EVAs are time consuming endeavours and present unavoidable risks to the spacewalkers as well as reducing crew time available for scientific research. For these reasons, the ISS partners commit to EVAs only when absolutely necessary. That necessity has become more common in recent expeditions, principally due to the challenges of maintaining an aging station in a post-Shuttle era. Space Shuttle crews routinely performed external maintenance on the station, maintenance that is now only feasible by EVA of the ISS crew themselves.

This will be the third EVA undertaken by Williams and Hoshide on this trip. They were only scheduled for one spacewalk in September to correct a faulty power module, but a second trip was scheduled when the first turned into a marathon struggle with a stubborn bolt. Williams took top spot for female EVA hours following that last spacewalk; if the upcoming EVA proceeds as scheduled, she will hold the fifth most EVA time of any spacefarer at more than 50 hours. The top spot is held by cosmonaut Anatoly Solovyev with 82 hours and 22 minutes of extravehicular time.

Looking forward, the ISS program intends to reduce the number of EVAs performed each year by increasing the use of robotics, both in the form of the Special Purpose Dextrous Manipulator (SPDM) “Dextre,” and the humanoid Robonaut 2.  The ISS could serve as a pathfinder for increasing robotics capabilities in space, which will go on to have high value in future beyond Earth orbit (BEO) missions and spacecraft. However, current robotic technologies and techniques are not at the readiness point where robotics can completely replace spacewalks.

NASA Television will provide live coverage of the spacewalk beginning at 6:15 a.m. CDT Nov. 1. The excursion is scheduled to start at 7:15 a.m. EDT and last about 6.5 hours. This will be the seventh spacewalk for Williams and the third for Hoshide. It will be the 166th spacewalk in support of space station assembly and maintenance.