When Space Shuttle Discovery touched down in Florida on 19 April 1985—suffering seized brakes and enduring a burst tire in the process—she left some unfinished business in low-Earth orbit. A few days earlier, her crew deployed an important U.S. Navy communications satellite, called Leasat-3, whose antenna had stubbornly refused to unfurl and whose perigee kick motor had failed to ignite. Despite sterling efforts to fashion a makeshift “flyswatter” and send two astronauts on a fruitless contingency EVA, the satellite lingered in an orbit far lower than its intended 22,600 miles. Within days of the incident, NASA’s bulletproof attitude led to the first mutterings of a shuttle mission to recover, repair, and reboost Leasat. The flight, designated “Mission 51I,” succeeded spectacularly and amply demonstrated the reusable orbiter’s myriad capabilities.

For James “Ox” van Hoften, however, it did not begin with much excitement. When the crew—Commander Joe Engle, Pilot Dick Covey, and Mission Specialists Jim Buchli, Mike Lounge, and Bill Fisher—were named in November 1983, they were slated to deploy a Tracking and Data Relay Satellite, and, later, as the shuttle manifest writhed and contorted over the following year, they ended up training to retrieve a NASA payload known as the Long Duration Exposure Facility. In the meantime, Buchli was named to another mission and van Hoften took his place on 51I. “Stale, pale, and male,” was Lounge’s summary of the crew and its cargo, “but we had a great time.”

Lounge and van Hoften shared similar backgrounds. They had both served as reservists in the Air National Guard after periods of active military duty, and one night in April 1985, whilst training for 51I, they were on alert status at Ellington Field in Houston. Midway through their duty, the two men heard about the Leasat fault and started swapping ideas about how to resolve it. They even roped in Engle for his opinion. “Back then,” van Hoften said, “there was a much more can-do spirit at NASA and everyone felt like, hey, you can do anything.” Armed with the relevant data on Leasat—its size, mass properties, angular momentum, and so forth—the men sat down with Engle and Covey, with a few pieces of paper and some push-button calculator watches, to hash out a plan. 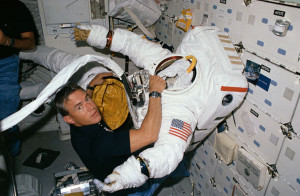 As 51I’s ambitious space salvage operation took shape, one thing was certain: the mission would be EVA-intensive and RMS-intensive. Pictured on Discovery’s middeck with one of the space suits, astronaut Bill Fisher would perform delicate electrical work on the crippled Leasat-3 (Credits: NASA).

Their first idea, to bring the satellite back to Earth, quickly became unrealistic, since it was filled with volatile hydrazine fuel. At length, the plan crystallised into a complex affair, whereby Leasat would be recovered andredeployed into space using the shuttle’s Canadian-built Remote Manipulator System (RMS) arm. A method was devised to bypass the satellite’s faulty deploy switch and provide power to the electrical buses from the batteries using external test ports, and NASA management was sufficiently enthused to send the astronauts to Hughes Aerospace—the prime contractor of Leasat—in Los Angeles. In the auditorium, despite a bout of laryngitis which left him hoarse, van Hoften outlined the plan to around a thousand engineers and managers.

“Can we stop the rotation of the spacecraft?”

“Oh, yeah,” replied the astronaut. “It’s only going to take … ”, and he demonstrated, “this much force to the stop the rotation. That’s not an issue.”

“Did anybody think that we could have a person stop the rotation?”

“Well,” van Hoften replied, with a twinkle in his eye, “here’s me!”

He sketched himself next to Leasat and reminded the gathered engineers that a few months earlier, in November 1984, “Little Joe” Allen had managed to grab the errant Palapa-B2 communications satellite. It should be equally possible for the much larger van Hoften to grab the much larger Leasat. In all seriousness, though, van Hoften had already performed two EVAs to retrieve and repair NASA’s Solar Max observatory, and he knew his own capabilities and those of the RMS.

Hughes’ president was so impressed that he took van Hoften to one side and immediately called NASA Administrator James Beggs to invest $5 million in the Leasat salvage effort. When the go-ahead finally came from NASA management, Engle, Covey, and Shuttle Program Mnaager Glynn Lunney were at the home of 51I Lead Flight Director Jay Greene. The four men promptly drained a bottle of Old Overholt, Greene’s favourite whisky. “We drank that bottle,” Covey related in his oral history, “celebrating the fact that we had hoodwinked the whole system into letting us think that we could go do this. It would not happen today!” 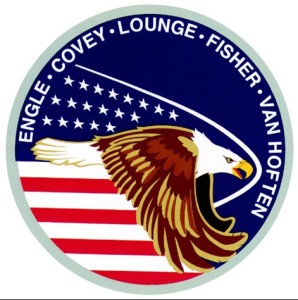 Despite the seat-of-the-pants approach to the salvage effort, as the crew plunged into training, there were many aspects for which they could not effectively prepare. Instead, they had to hone their skills, rather than specific tasks, because there were no assurances for how well or badly the mission would go. The Solar Max repair had been choreographed down to the finest detail, but Leasat was different: by their own admission, the astronauts were “winging it.”

At one stage, it seemed likely that Joe Engle might launch on his 53rd birthday, as launch slipped into the third week of August 1985. The first attempt on the 24th was scrubbed due to local rain showers; although there were no thunderstorms in the area, the conditions were sufficiently poor to violate Launch Commit Criteria. Discovery had only a couple of days available in which to achieve her rendezvous “window” with Leasat, and launch was quickly recycled for the 25th. That attempt also came to nothing when a failure in the shuttle’s backup flight software was experienced. A two-day delay pushed the next attempt past Engle’s birthday and on to the 27th. (To celebrate, the astronauts unstowed his birthday cake from a middeck locker and presented it to him.)

Dick Covey was not alone in his frustration. “I can’t believe we scrubbed for those two little showers out there,” he remarked. “Anybody with half a lick of sense would have said: Let’s go. This could be a lot worse.” However, Chief Astronaut John Young told them bluntly that they could not make calls on the weather, as their knowledge was limited to the view from inside the orbiter. They should focus on the mission, he said, and leave others to worry about the weather.

The morning of the third launch attempt, 27 August, was even more dismal, and the astronauts were clad in yellow raincoats over their flight suits as the Kennedy Space Center suffered a torrential downpour. After being strapped into their seats, Lounge and van Hoften—certain that the weather was too appalling for NASA to give the green light to go—released their harnesses and took a nap. From his perch on the right-hand side of the cabin, Covey was amazed as they moved smoothly and crisply through the built-in holds and was even more amazed when he was given the go-ahead to start Discovery’s Auxiliary Power Units (APUs), with five minutes to go in the countdown. As he flipped the switches, he could see sprinkles of rain on the forward windows. “The reason,” Joe Engle explained, “was that they had one more day delay before they had to de-tank and that would have been two more days and the weather forecast was not good for the next day, anyway.”

Downstairs, on the middeck, the hum of the APUs startled Bill Fisher.

“Yeah, sure. We’re not going anywhere today. Why are you starting APUs?”

“Damn it, Fisher, we’re going! We’re going to launch! Get back in your seat and get strapped in.”

The final seconds progressed, as the NASA commentator reeled off the milestones and Discovery’s internal systems rumbled to life, in harmony, it seemed, with the rumble of the inclement weather.

“And we have a Go for autosequence start,” came the call at T-31 seconds, as Discovery’s flight computers assumed primary command of vehicle critical functions. “T-15, 14, 13, 12, 11, 10, nine … we have a Go for Main Engine Start … ” as Discovery’s three liquid-fueled powerplants flared to life in the gloom of a pre-dawn darkness, “ … four, three, two, one … ignition … and LIFTOFF … Liftoff of the 51I and the commercial deploy and repair mission … and it has cleared the tower!” 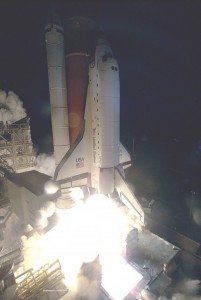 On the cusp of daybreak, Mission 51I spreads its wings on 27 August 1985, kicking off one of the most dramatic shuttle flights in history (Credits: NASA).

Launch occurred on the very cusp of daybreak, at 6:58 a.m. EDT, with the shuttle’s engines and the twin Solid Rocket Boosters blazing brilliantly as the 20th mission of the reusable fleet spread its wings and took flight.

It is interesting to view launches from this era, particularly the images from within Mission Control, and understand the “Go” fever associated with each event. “It turned out we launched right through the eye of a hurricane,” van Hoften told the historian. “It coalesced into a hurricane and then we spent the whole time looking down at this major hurricane, going around wiping out Florida.” He was referring to what became Hurricane Elena, which originated as a gigantic tropical wave off the coast of East Africa on 23 August and progressed weakly westwards, running parallel to northern Cuba, becoming a tropical storm on the 28th and a hurricane on the 29th. From orbit, the crew would take several stunning images of the hurricane, which expanded across the entire Gulf of Mexico and whose winds reached a peak of more than 100 mph on 1 September, yet steadily weakened as it headed north and finally made landfall in Biloxi, Miss. In its few days of mayhem, Elena wreaked $1.2 billion of damage, but, miraculously, caused no direct fatalities.

From the flight engineer’s seat, Mike Lounge had crafted himself a small Mylar “mirror” and fixed it to the back of his checklist, hoping to watch the reflected launch through the overhead window, just over his left shoulder. “If you hold this mirror, right in your lap,” he said, “you get this great view as the orbiter lifts up and rolls. You’re looking through that window right down at the pad and this huge billow of smoke and flame … and the pad gets smaller and smaller.” There was little time to be a spectator, of course, as Lounge paged through his checklist, mentally ticking off each of the major milestones: Negative return, Single-engine TAL, and the call which had caused his predecessors, the crew of Mission 51F, great anxiety: Abort to Orbit. After what seemed like an age, the moment of main engine shutdown occurred and the sensation of weightlessness was felt through a gentle rising against the straps and the quirkiness of the checklist, floating, in front of his eyes. That comical sight was arrested very soon by a sight of unimaginable grandeur: Africa, looming large and spectacular in Discovery’s windows.

They were in orbit.

Ahead of them lay three satellite deployments … and then Leasat.