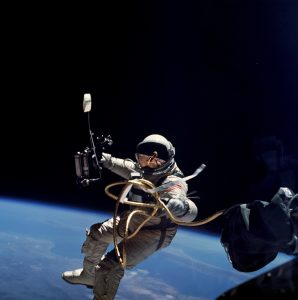 The history of extravehicular space activities (EVAs) is strewn with challenges large and small. Some of the most common are difficulties with heat, cold, fatigued fingers, and uncooperative spacecraft hardware; such discomforts were rarely hazardous and over time, suit and EVA activity design evolved to reduce these issues. Now and again, though, more significant problems have cropped up, such as astronaut Luca Parmitano’s prematurely truncated July 16 EVA. Here is a brief history of EVAs gone wrong.

The very first EVA was achieved by the USSR on March 18, 1965. Cosmonaut Alexey Leonov spent 12 minutes outside his Voskhod 2 spacecraft. In that time, the internal pressure caused his suit to balloon to such an extent that he was not only unable to operate either his chest-mounted camera nor the unit secure on the craft to record the historic event, he nearly didn’t fit back inside the hatch. He finally made it by partially depressurizing his suit, a risky maneuver that could have resulted in decompression sickness or even unconsciousness. His exertions also brought Leonov close to heat stroke, with his body temperature climbing 1.8°C in 20 minutes.

The first EVA of a US astronaut took place on June 3, 1965. Ed White had a great time outside the Gemini 4, but he struggled with the hatch latch both on the way out and the way back. It took him 5 minutes of intense effort to get the door closed.

On June 5, 1966, Gene Cernan spent some time outside Gemini 9. Conducting the most complicated spacewalk to-date, Cernan spent 2 hours outside, struggling against his stiff spacesuit all the while. He ended up ripping the outer layers of the suit in his efforts. While not enough to depressurize, the torn layers did let the Sun through, causing hotspots on the astronaut’s back.

On July 19, US astronauts John Young and Michael Collins performed a standup EVA that went very well until lithium hydroxide leaked into helmets. The chemical was used to absorb exhaled carbon dioxide; it apparently invaded the suits when two fans in the umbilical circulation loop were run simultaneously. Later Gemini EVAs took care to run only a single fan at a time.

On December 25, 1973, astronauts William Pogue and Gerald Carr spent 7 hours outside Skylab  servicing equipment and taking photographs. Carr’s coolant system sprung a leak, detected when the leaking water, colored yellow by chromate added as a corrosion inhibitor, formed yellow ice on the front of his suit. The leakage rate was too low to impact Carr’s EVA, which continued as scheduled. This problem recurred on his next EVA just a few days later to similar effect.

On February 3, 1974, Skylab 4 astronauts Carr and Edward Gibson prepared experiments and took photographs for over 5 hours. Gibson’s cooling system sprang a leak; he switched to minimum cooling and completed his tasks without further interruption.

On August 15, 1979, cosmonauts Vladimir Lyakhov and Valeri Ryumin undertook a 1 hour 23 minute EVA to discard a radio antenna from Salyut 6’s aft docking port. Ryumin had to cut through four 1mm steel cables to free the dish, which flopped more aggressively in his direction with each snip of his wire cutters. After the EVA, Ryumin discovered the antenna had actually caught him one, leaving a small puncture in his suit’s primary bladder. There were fortunately no repercussions for Ryumin.

On August 11, 1984 STS 41-C astronauts George Nelson and James van Hoften performed a satellite servicing EVA on SolarMax. Nelson experienced a urine container leak, but the leak was absorbed by his liquid cooling garment and did not cause any damage or reach his helmet. Nelson also experienced some visor fogging when he reduced coolant flow, inadvertently instigating condensation accumulation.

On August 8, 1984 cosmonauts Leonid Kizim and Vladimir Solvyov took the Orlan-D spacesuits out for their 10th and final EVA. It was a taxing one, involving repair of the Salyut 7 propulsion system. Solovyov’s coolant pump failed during the spacewalk; he compensated by running his fans and taking rest periods. Both cosmonauts visibly banged up their hands in their efforts, but no lasting damage was done.

During the first Mir EVA on April 11, 1987, cosmonaut Alexander Laveikin’s spacesuit experienced a loss of pressure. The problem was quickly traced to incorrect switch settings and corrected; the EVA continued as planned.

On June 30, 1988, Mir PE-3 cosmonauts Vladimir Titov and Musa Manarov undertook a 5 hour repair of an X-ray detector on the Kvant module. Titov’s spacesuit gave off a low ventilation signal. It turned out the signal was a false alarm, triggered by humidity interfering with the sensor. 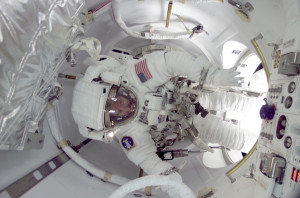 Following a 7 hour EVA by cosmonauts Anatoli Solovyov and Alexandr Balandin on July 17, 1990 to repair thermal blankets on Soyuz TM-9, the spacefarers found that the hatch on their Kvant 2 airlock would not close. They were forced to reenter the spacecraft through the instrument science compartment. Although not originally intended for that purpose, the instrument compartment was thereafter designated as a contingency airlock.

On July 15, 1991, cosmonaut Anatoli Artsebarski experienced unusually heavy air leakage through abrasions in his gloves, acquired during assembly of the MIR Sofora truss.  Artsebarski continued to be plagued with suit problems throughout the 3 EVAs devoted to Sofora assembly. Prior to a July 23 activity, his suit’s liquid cooling garment connector came apart – he spaced the suit during the next EVA. On July 27, his heat exchanger ran out of water, fogging his helmet to that point that crewmate Sergei Krikalev had to lead him back to the airlock.

On February 20, 1992, cosmonaut Sergei Krikalev and Alexandr Volkov were performing various activities outside Mir when Volkov’s heat exchanger clogged, possibly due to extended storage of the suit, this being the period just after the fall of the USSR, when resupplies were sparse. Volkov spent the rest of the EVA sticking close to airlock, using the module’s heat exchanger via umbilical. Krikalev completed more distant tasks on his own, in violation of the required “buddy” system.

The first EVA during a joint US-Russia mission took place on September 28, 1993. It had to be cut short at 1 hour 52 minutes when cosmonaut Vasili Tsibliyev’s cooling system failed. A second attempt on October 22 was also cut short, at 38 minutes, when Alexandr Srebrov’s suit developed an oxygen flow problem. Both Tsibliyev and Srebrov managed to finally complete the EVA on October 29 without suit malfunction.

On February 9, 1995 STS-63 astronauts Michael Foale and Bernard Harris  performed testing of newly modified EVA Mobility Units in preparation for the beginning of International Space Station construction. The EVA was terminated after 4 hours 39 minutes when the astronauts became unacceptably cold – Foale’s gloves reached -6°C during orbital night and Harris’ suited feet came in contact with Discovery’s -148°C structure. Harris experienced a burning sensation in his eyes when removing his helmet, attributed to contact with the anti-fog coating.

On February 10, 2001, astronauts Thomas Jones and Robert Curbeam were connecting cooling lines on the Destiny module, resulting in small leak of ammonia crystals. There were concerns that some of the crystals might adhere to spacesuits and vaporize aboard Atlantis, causing respiratory issues. An ad hoc decontamination procedure was undertaken with apparent success.

The very next EVA on June 24, 2004 during Expedition 9 also had to be cut short, this one at just 14 minutes. Astronaut Michael Fincke experienced a pressure problem in his main oxygen tank. He and cosmonaut Gennady Padalka completed their work on June 30.

On August 15, 2007, astronauts Richard Mastracchio and Clay Anderson performed some ISS installation work during STS-118. During the EVA, Mastracchio noticed a hole in his left glove. As a precaution, the EVA was terminated early at 5 hours 28 minutes. There was little actual danger since only one layer of five was punctured.

On July 16, 2013, astronauts Chris Cassidy and Luca Parmitano had to terminate an EVA after 1 hour 32 minutes when water from an unidentified leak accumulated in Parmitano’s helmet, gradually covering his ears, eyes, and nose before he was able to return to the station and remove the headgear.

With thanks to David S. F. Portree and Robert C. Trevino, authors of Walking to Olympus: An EVA Chronology, where you can read many  fascinating EVA tales.