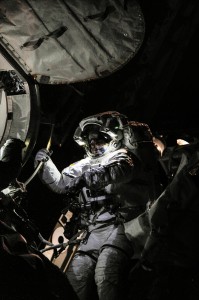 A five-member investigation board – including veteran astronaut Mike Foreman – has been convened by NASA and will begin work on 2 August to identify the cause of a perplexing problem which caused Luca Parmitano’s helmet to fill with water during EVA-23. The spacewalk, which took place on Tuesday 16 July, was supposed to last 6.5 hours, but was terminated by Flight Director David Korth after just 92 minutes when Parmitano reported that water was entering his helmet. At its worst, the incident left 1-1.5 liters of water inside the helmet and rendered Italy’s first spacewalker temporarily unable to hear and speak as liquid entered his eyes, nose, ears, and mouth.

The investigation board is chaired by Chris Hansen, the International Space Station (ISS) chief engineer at the Johnson Space Center in Houston, Texas. He will be joined by Mike Foreman – who performed a cumulative total of six EVAs during two Space Shuttle missions in March 2008 and November 2009 – as well as ISS safety and mission assurance lead Richard Fullerton, human factors specialist Sudhakar Rajula and NASA Engineering and Safety Center (NESC) chief engineer Joe Pellicciotti. According to NASA, the team will investigate the 16 July incident and are tasked to “develop a set of lessons learned” and “suggest ways to prevent a similar problem in the future”. 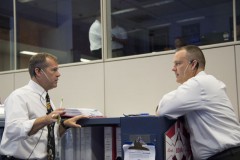 NASA engineering teams are already hard at work exploring the space suit hardware, with recent attention having centered on the sublimator, gas trap, I-134 filter, check valve, and water separator, all located within the Portable Life Support System (PLSS) backpack. Although spare parts are available aboard the ISS, the Associated Press has recently reported that NASA is scrambling to put a specialized toolkit aboard the Progress M-20M cargo craft, due to launch toward the space station on Saturday 27 July. At the present time, all NASA space suits – properly known as “Extravehicular Mobility Units” (EMUs) – are classed as “offline” and will only be used in an emergency situation. None of the tasks scheduled for the remainder of Parmitano’s EVA with Chris Cassidy is considered to be urgent and will be delayed until the suit is repaired or the problem isolated.

EVA-23 – the 23rd station-based spacewalk by astronauts clad in U.S. suits from the U.S. Operating Segment (USOS) – began 13 minutes ahead of schedule at 7:57 a.m. EDT on Tuesday 16 July. The two men swiftly parted company, with Cassidy heading to the box-like Z-1 truss to complete the reconfiguration of Y-Bypass jumper cables and Parmitano making his way to the Unity node to begin routing 1553 data cables and an Ethernet cable to support Russia’s forthcoming Nauka Multi-Purpose Laboratory Module (MLM), due to launch later this year or early in 2014. 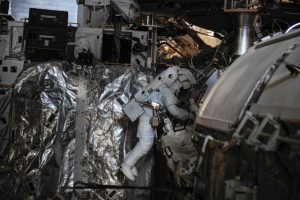 Luca Parmitano works on the routing of data and Ethernet cables during EVA-23 (Credits: NASA).

About 45 minutes into the EVA, Parmitano made his first reference to the presence of water on the back of his head, soaking into his “Snoopy” communications skullcap. Within ten minutes, he was joined by Cassidy, who verified that up to 800 milliliters of water was visible inside the helmet. According to Cassidy, the water soaked Parmitano’s Snoopy cap and covered his eyes and ears. In conjunction with Mission Control, the astronauts debated possible causes and solutions. Suspecting a coolant leak, Parmitano reduced the flow rate, and admitted that a drinking water leak was unlikely as his Disposable In-Suit Drink Bag (DIDB) was already dry. By 9:06 a.m., less than 20 minutes after the first report of trouble, Flight Director Korth terminated the EVA and ordered both spacewalkers to make their way back to the Quest airlock. 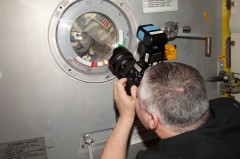 Cosmonaut Fyodor Yurchikhin photographs Parmitano and Cassidy from within the Quest airlock’s inner segment as EVA-23 draws to a close. Yurchikhin and NASA astronaut Karen Nyberg served as “intravehicular” crew members during the EVA, helping the spacewalkers with the suits and running the checklists (Credits: NASA).

In order to rid his helmet of the water, Parmitano resolved to drink some of it and noted an unusual taste, which would seem to be consistent with it coming into contact with the anti-fog compounds on the inside of his visor. Under the deft control of Cassidy, the hatch was closed and sealed at 9:26 a.m., the airlock was quickly repressurized and Parmitano’s helmet was off by 9:38. EVA-23 marked the second-shortest spacewalk in ISS history, eclipsed only by a 14-minute excursion in June 2004, which was aborted shortly after it started when the primary oxygen bottle in astronaut Mike Fincke’s suit began to rapidly lose pressure.

Ahead of today’s announcement by NASA of the five-member investigative board, an Anomaly Resolution Team is also at work to identify the cause and make recommendations. Preliminary reports indicate that water pooled primarily inside the helmet and near to the liquid transport lines in the upper segment of the suit’s hard upper torso. The remainder of the suit, from the chest downwards, appeared to be dry. According to a report by NASASpaceflight.com, overall EMU pressures remained nominal throughout EVA-23 and there were no indications that the suit was running out of primary water. No leaks were reported from the DIDB, from Parmitano’s Liquid Cooling and Ventilation Garment or from the liquid-transport lines of the hard upper torso. This has served to eliminate a number of key suspects, leaving a possible cause somewhere in T2 port, or aft helmet vent.

The five-member investigative team will begin its work on 2 August and has access to experts and support personnel, enabling it to gather pertinent data, analyze facts, conduct necessary tests, identify the underlying cause of the EVA-23 incident and make recommendations to NASA Administrator Charlie Bolden in order to prevent such situations occurring during future spacewalks.