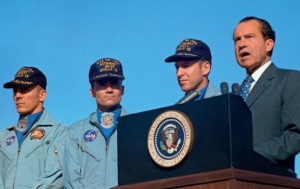 Somewhere among the jagged trenches of the South Pacific sits a graphite fuel cask containing 3.9 kg of plutonium from Apollo 13. The fate of the radioactive plutonium-238 has long been overshadowed by the successful return of the three NASA astronauts on board the ill-fated mission.

The plutonium was supposed to fuel the System for Nuclear Auxiliary Power, or SNAP-27 Radioisotope Thermoelectric Generator (RTG), designed to power a set of experiments on the lunar surface. But after an explosion crippled the craft and forced the crew to abandon plans of a lunar landing, the plutonium became yet another problem for mission control. Officials from NASA confidently told The New York Times that the biggest risk was that the 40-pound generator might hit someone when it fell to Earth. “It will keep a few fish warm,” a NASA official said. The Atomic Energy Commission, on the other hand, conceded the slight possibility that it could become ground into dust and dispersed.

NASA learned its lessons about engineering the fuel casks the hard way: in 1964, the Transit-5-BN mission aborted and the RTG burned up upon reentry above Madagascar, in keeping with its design. Traces of plutonium were found in the area months later. In 1968, the Nimbus B-1 weather satellite was aborted soon after takeoff from Vandenberg Air Force Base and the plutonium from the SNAP-19B2 RTG plunged into 300 feet of water off the California coast, with no release of radiation.

Apollo 13’s SNAP-27 fuel, as far as we know, slipped beneath the waves and came to rest 6 to 9 kilometers deep in the Tonga Trench, one of the deepest areas in the ocean. Subsequent testing by the U.S. Department of Energy has shown no spike in background radiation. Not surprisingly, NASA has no desire to go looking for the small cask, even with advances in submersible technology that would make such a mission at least technically feasible. “I don’t think that anyone has seriously considered that because of the cost of recovery,” said Leonard Dudzinski, a NASA program executive who deals with radioisotope power systems. 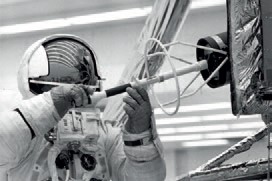 Indeed, NASA is trying to source additional plutonium 238 for its future deep space missions – the U.S. no longer produces the isotope and Russia has proved to be an unreliable source – but the useful life of the Apollo 13’s plutonium has expired. The plutonium poses little danger to the environment: the corrosion resistant cladding should withstand seawater for approximately 870 years, ten times the plutonium’s half life. According to NASA, the plutonium itself was in oxide form and was both chemically and biologically inert when it plunged into the ocean.

Over the years, the plutonium cask, far out of sight, has fueled two contradictory positions on the safety of RTGs for deep space missions. For NASA, its safe return to Earth proved the effectiveness of their safety engineering. “We recognize that the Apollo 13 [RTG system] worked,” Dudzinski said. “Follow on RTGs were based on that design and improved on that design.”

Critics have taken different lessons from the untimely plunges of the RTGs. In 1997, a group of safety experts, including physicist Dr. Michio Kaku, warned that 32 kg of plutonium contained in the Saturn-bound Cassini satellite posed a greater danger than NASA would acknowledge, but ultimately, their warnings did not prevented the mission from happening.

Matthew Van Dusen is a New York-based journalist. He is the Editor of Txchnologist.com, a publication sponsored by General Electric.