Rocket a man into space? How will you protect him above the atmosphere? NASA issued “specifications for the Mercury pressure suit” in October 1959, according to NASA’s “Project Mercury: A Chronology” (1963). The first phase would produce“operational research suits which could be used for astronaut training, system evaluation, and further suit development”; the second phase would be the “Mercury pressure suits in the final configuration.”

“The earliest fictional use of a space suit that I know of occurred in Arthur Train’s ‘The Moon Maker,’ which appeared in Cosmopolitan (magazine) during World War I,” de Camp wrote. “In the course of their expedition in a spaceship of the flying-ring type to demolish a runaway planetoid threatening the Earth, the characters of Train’s story land on the Moon to replace their fuel unit, which they do in space suits.”

However, de Camp said, “Long before Train’s story, men realized the need for protection and an oxygen supply in order to explore the upper air.”

British balloonists/aeronauts Henry Coxwell and Dr. James Glaisher, also a meteorologist, learned this when, on Sept. 5, 1862, they ascended 5.5 miles. “Glaisher lost consciousness, while Coxwell saved them by opening the relief valve with his teeth” in order to descend. Coxwell’s hands, nearly frozen, were useless, said the website fly.historicwings.com.

“Development of high-altitude breathing apparatus began in earnest,” de Camp wrote, “when the perfection of engine superchargers made it possible for military airplanes to operate effectively far above the altitudes at which unprotected men could survive.” Before then, pilots “tried to get their oxygen by sucking it from a tube equipped with a pipe-stem mouthpiece.” The downside was “the aviator had to keep his mind on it, and if he accidentally dropped the tube he might easily pass out while groping around the floor.”

B.F. Goodrich built a suit for aviator Wiley Post “in the early 1930s,” de Camp documented. “It was equipped with a cylindrical helmet with a flat circular pane of glass in front, rather like a medieval tilting-helm (stet), and was supplied with plain (pressurized) air.” Goodrich also built an “experimental pressure suit” during World War II, incorporating “a pressure-breather mask inside the bubble-type methyl-methacrylate helmet.” The suit had “elaborate joint-articulations, the service hose supplying air, oxygen, electricity,” along with “numerous slide fasteners, valves, and other fittings.” 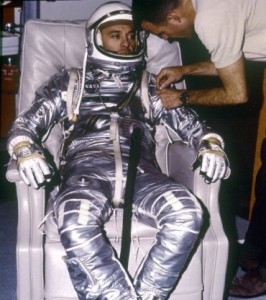 Alan Shepard, the first American in space, is in his Mercury spacesuit (Credits: NASA).

With increasing advancements, pilots conquered the sky until, that is, the space era. Suddenly, the sky was no longer the limit. On Earth, said “Project Mercury” (Praxis/2001), “the lungs produce carbon dioxide and water vapour under a constant pressure, while inhaled air is at external pressure. As an unprotected body passes up through the atmosphere the external air pressure decreases. This results in carbon dioxide and water vapour occupying more of the lungs’ internal volume, leaving less room for inhaled air.”

The Mercury astronauts’ suit was “a modified version of a U.S. Navy high altitude jet aircraft pressure suit,” said inventors.about.com. “It consisted of an inner layer of neoprene-coated nylon fabric and a restraint outer layer of aluminized nylon. Joint mobility at the elbow and knees was provided by simple fabric break lines sewn into the suit; but even with these break lines, it was difficult for a pilot to bend his arms or legs against the force of a pressurized suit.”

The astronaut first shrugged into a “one-piece undergarment” with “thumb loops … at the ends of the sleeves to prevent them pushing up the astronaut’s arms when he donned his pressure suit,” “Project Mercury” said. The undergrament’s “waffle-weave material … lifted the suit material sufficiently to allow the oxygen to circulate and cool those areas of the wearer’s body.” 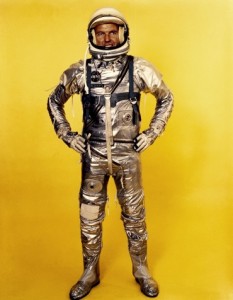 The bulk of the Mercury suit covered the torso. “The inner gas-retaining layer was constructed from a ply of neoprene and neoprene-coated nylon fabric. … The outer layer was manufactured from heat-reflective aluminized nylon fabric.”

The helmet was “a hard fiberglass shell with an individually moulded crushable impact liner, and a pivoted clear plexiglass visor … attached to the torso by a rigid neck ring and locking mechanism. A tie-down strap was provided to prevent the helmet moving up when the suit was pressurized.”

As Mercury advanced, so did the suit. For the second manned flight, Gus Grissom “was the first to wear a convex mirror attached to his parachute harness,” “Project Mercury” stated. “The mirror was positioned such that, when the astronaut was seated on his prone couch, the astronaut-observer movie camera positioned above the main instrument panel could also record the instrument readings on that panel.”

John Glenn, aboard the first orbital flight, had “small electric light bulbs … added to the ends of the middle and index finger of both gloves.”

Lt. Clifton McClure wore this partial pressure suit for his 1958 Man High III flight, while he rode in a sealed gondola lifted by a balloon. The suit is displayed at the New Mexico Museum of Space History, in Alamogordo, New Mexico. To show how preservation of such artifacts was not foremost, the museum was told that McClure’s son used to wear this suit for Halloween (Credits: Michael Shinabery/NMMSH).

The final Mercury mission, which Gordon Cooper piloted, “contained the highest number of changes” to the pressure suit, according to “Project Mercury.” Originally “designed to support the astronaut for between 24 and 34 hours in orbit,” man was staying longer. Changes included “new soft boots”; the “shoulders … were reconstructed and the construction of the gloves was also improved.” In addition, “the helmet contained a new oral thermometer, to replace the rectal thermometer used on all earlier manned flights.”

The National Air and Space Museum is undertaking efforts to better preserve the suits that were not designed to last much past one mission.

“The spacesuits worn by the first astronauts are falling apart from old age,” said nature.com. “Examination of suits from the 1969-1972 Apollo Moon landings, for example, showed that lunar dust surprisingly had stuck even to the stainless-steel fabric protecting the astronaut’s gloves, and had begun to cut through some of the fibres. Chemists are also keen to study the ageing of the polymers and rubbers used, to help improve materials for spacesuits that will, in future, be needed for much longer trips. Early rubber seals only had a shelf-life of 6 months.”

“Some were displayed under bright lights or left in humid rooms, leading to fungal growth, metal corrosion and degraded plastic,” nature.com said. Old “sweat” is caustic; PVC cooling tubes “have been leaching acidic plasticizer.” Without conservation, the suits will “have only about 20 years left in them.” With the current efforts “they should now last another 50 years” while additional work is completed to extend their lives.

Image caption: B.F. Goodrich built this suit for aviator Wiley Post, who is at left (Credits:National Air and Space Museum).