These days, Joe Nowetner is an operations manager at UTC Aerospace Systems, the contractor responsible for NASA’s fleet of spacesuits. Early in his career, Joe worked as an electrical technician at the Johnson Space Center (JSC) supporting the testing regimen of a new spacesuit design, the EMU (Extravehicular Mobility Unit). One particular test served as a startling reminder that exploring space is a dangerous business…even for those who never leave the ground. Joe has never forgotten the lessons he learned that day. Neither has NASA.

The EMU design would persevere to become the spacesuit worn by spacewalking astronauts throughout the Space Shuttle Program and even today on the International Space Station. In the nearly 40-year history of the suit, truly scary moments have been so infrequent that they are still referenced in generic terms, with no distinction needed…i.e. “the water leak”, “the chamber incident”, “the bellows failure”. In that lingo, the events of April 18, 1980 are summarized as “the EMU fire”.

At that time, the space shuttle was still ramping up for its inaugural flight and the EMU was an unproven system. Nowetner was part of a JSC team tasked to execute functional tests on an EMU unit. This task was a critical step in preparation for the first manned test of the suit, an event where space-like conditions would be simulated in a large vacuum chamber.

Although the EMU was unmanned for the April test, the suit’s life support system was exercised. Ironically, it was the life support system that caused a flash fire which burned two technicians (one severely), destroyed the EMU, and reawakened a culture of safety throughout NASA. Here’s what happened. 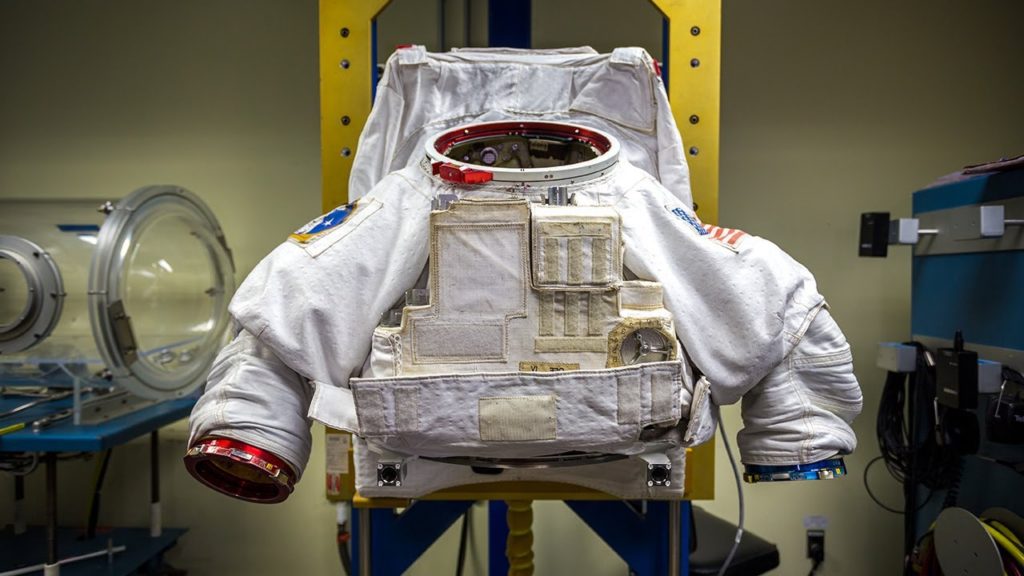 While the cause of the fire remains uncertain, its destructive effects were apparent. Fueled by pure high-pressure oxygen, the onset of the fire was immediate and intense. The aluminum block that comprised the regulator was vaporized in less than one second. Other aluminum components burned in the oxygen-rich environment. Fabric components of the suit ignited and remained aflame until responders utilized carbon dioxide fire extinguishers. Total hardware damage was estimated to be about two million dollars.

The most seriously injured technician was hospitalized with first and second degree burns over 30% of his body. Another technician suffered burns to his hands but did not require hospitalization. The failed regulator had 19 previous high-pressure cycles without incident. If the regulator had held out for a few more cycles and failed during the manned event, the expected consequences would have been much more dire. 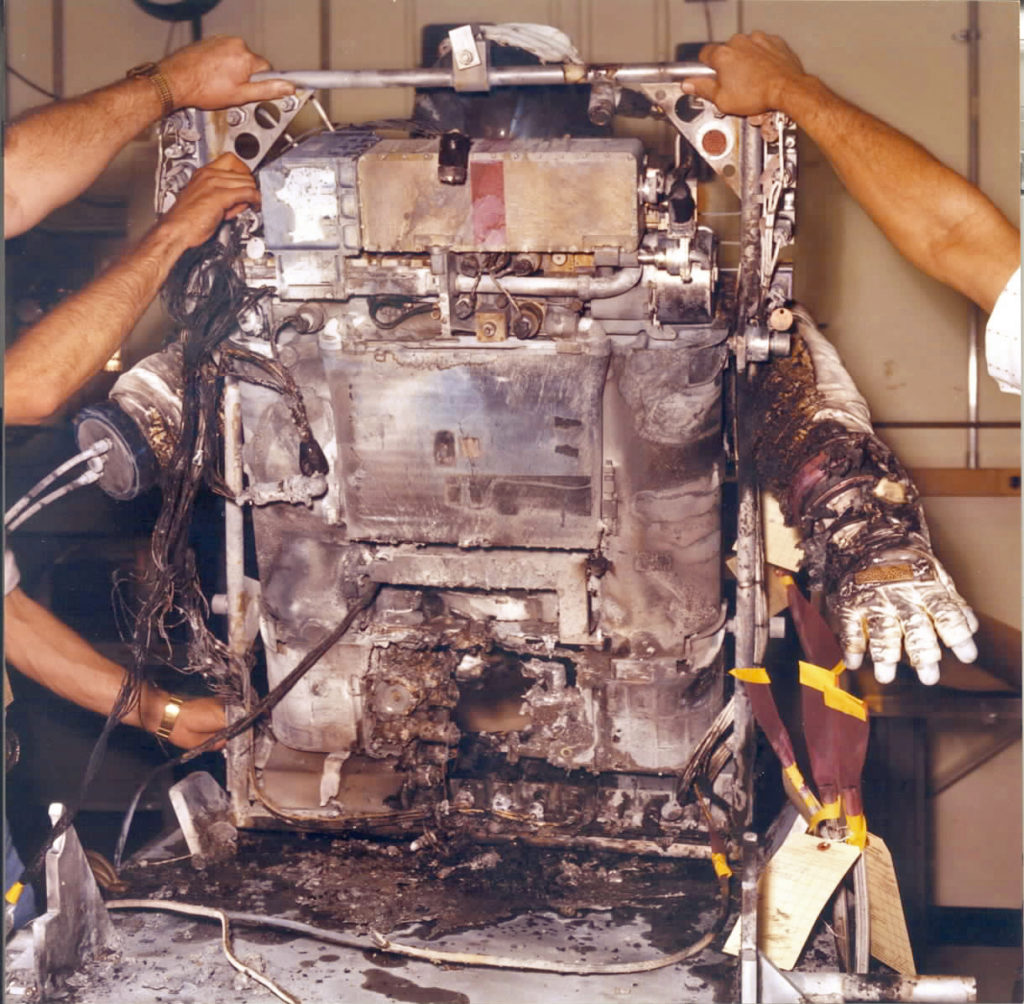 Post-incident analysis of the EMU life support system revealed that the fire was intense enough to burn aluminum. Credits: NASA

In the weeks following the fire, a team of engineers attempted to find out what went wrong. Using regulators from the same batch as the burned unit, investigators made more than 2000 attempts to recreate the blaze–all unsuccessful. Even without a smoking gun, the team found numerous areas to be concerned about and recommended a list of engineering and procedural changes to the EMU.

Most of the suggested changes were geared towards mitigating the risks presented by the three suspected ignition sources. The aluminum regulator was changed to Monel (a nickel/copper alloy that resists burning in pure oxygen). Machining and inspection methods used to manufacture the regulator were revised to prevent and identify errors that would create thin internal walls. O-rings were replaced with more ignition-resistant materials. Passageways in the regulator were redesigned to reduce the probability of trapping contaminants within the system. The list goes on.

In addition to the technical analysis of the regulator failure, investigators scrutinized other disconcerting aspects of the fire. For instance, the test took place in a room with just a single exit door. Of the seven occupants in the room when the fire erupted, only Nowetner and one other fled through the door. Those remaining who were able to flee moved deeper into the room, where they would have been trapped if the fire had spread. Not only were escape options limited, but none of the participants had been briefed on how to react if a fire occurred. Although Joe had found safety outside the room, he returned to help those still inside.

Protective equipment was another concern. Everyone in the room was wearing safety glasses, as dictated by test protocol. It is believed that this precaution helped save the eyesight of the severely burned technician. Unfortunately, they were also wearing nylon smocks. These have a tendency to melt into skin during a fire, making a bad situation worse. Although he escaped uninjured, Nowetner’s smock had numerous burn marks from spattered aluminum. The investigation panel suggested switching to more fire resistant fabrics.

The design changes made to the EMU life support system have thus far prevented similar fires from occurring. Yet, there were many other effects that reached far beyond the EMU community. In identifying the root causes of the incident, NASA determined that future tests could be made safer with a greater focus on identifying potential problems in advance. As a result, NASA formalized the procedures used when executing tests and required that they be reviewed by an independent safety organization to identify hazards.

NASA also levied requirements for every testing or training event to undergo a Test Readiness Review (TRR) and/or Safety Review by a panel of subject matter experts. These milestone events have become an established facet of the NASA culture. It’s easy to look from the outside (or even the inside) and think that the overhead of maintaining such rigorous review standards makes the agency a slow-moving morass of analysis. There is certainly some truth to that. Yet, with priceless custom hardware and human lives often at risk, the cost of repeating mistakes seems harder to bear.

Even routine events are subject to these review requirements. I can’t begin to estimate the number of TRRs that I attended during my time at JSC–most of them held in the same room with the same people discussing the same topics. Yet, if I ever felt that the process was extravagant, I needed only glance at a photo on the wall to remind me why such diligence is necessary. It was a photo of the burned EMU.

I do not intend to suggest that NASA lacked a safety conscience prior to the EMU fire. Nor would it be accurate to say that the fire was the only catalyst for change. Subsequent events such as the Challenger and Columbia disasters also had deep and lasting effects to the agency’s views on safety. However, I think it would be fair to say that NASA’s pre-fire safety culture lacked focus and uniformity. The lessons of the EMU fire played a strong part in introducing those elements.

Many working at JSC today were not even born when the EMU fire reshaped NASA’s approach to safety. Perhaps some who participate in the agency’s current safety processes aren’t aware of their genesis. Joe likes to show them. He has given numerous presentations to various NASA audiences over the years, explaining how a fire that few people know about provided lessons that NASA will never forget.

My thanks to Joe Nowetner for taking the time to share his story with me.